Peyton Place: "Everything in this town happens behind brown wrappers"


Peyton Place: "Everything in this town happens behind brown wrappers" 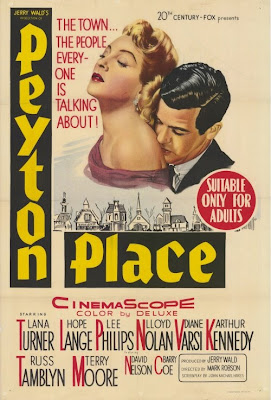 In a 1956 interview with journalist Hal Boyle, Peyton Place author Grace Metalious said: "To a tourist, these towns look as peaceful as a picture postcard. But if you go underneath that picture, it's like turning over a rock with your foot--all kinds of strange things crawl out. Everybody that lives in town knows what's going on--there are no secrets--but they don't want outsiders to know."

A fictional exposé about a New England town called Peyton Place, her debut novel enthralled readers with its dark small town secrets. It stayed on the New York Times bestseller list for over a year and attracted the attention of Hollywood. Producer Jerry Wald convinced 20th Century-Fox to pay $100,000 for the film rights to Peyton Place. Wald was known for making films with strong female characters, such as Mildred Pierce, Flamingo Road, Johnny Belinda, and Caged. From the outset, he wanted 37-year-old Lana Turner for the lead role of Constance Mackenzie, a single mother who keeps her distance from men. The studio, however, envisioned Jane Wyman or Olivia de Havilland as Constance. In the end, Wald got his way.

The film adaptation, as did the novel, also centers on Constance's bright teenage daughter Allison (Diane Varsi) and her friend, Selena (Hope Lange), who lives in one of the shanties outside of town. Allison develops a fondness for Norman (Russ Tamblyn), a shy young man who lives with his possessive mother. Selena has to cope with her drunken, leering stepfather (Arthur Kennedy), who beats her mother and drives away her older brother. Other characters include: Michael Rossi, the high school's handsome new principal; Allison's wealthy classmate Rodney Harrington and his provocative girlfriend Betty; and the town's physician--and conscience--Dr. Swain.

It's easy to label Peyton Place as a big screen soap due to its interwoven dramatic elements. Perhaps, it is, but who says that's a criticism anyway? Even in her novel, Metalious amped up the turmoil by incorporating incidents from three real-life New Hampshire towns. Critics were kind to Peyton Place, with many considering it an improvement on the novel (though I wonder how many of them actually read the book).

The standouts in the Peyton Place cast are young stars Diane Varsi and Hope Lange. Varsi's poignant narration provides the nostalgic transitions as the plot progresses from 1941 into the World War II years. She also effectively captures Allison's passion for life and later her disillusionment when she learns the truth about her deceased father. Lange has a smaller role, but evolves nicely from an innocent young woman to one harboring dark secrets that weigh heavily.

Lange went on to a long career in film (The Young Lions) and television (The Ghost and Mrs. Muir). Diane Varsi was not as fortunate. She had hitchhiked to San Franciso in the late 1950s after seeing Rebel Without a Cause. Her first film role was Peyton Place, with 20th Century-Fox signing her to a contract. After high profile parts in Ten North Frederick (as Gary Cooper's daughter), From Hell to Texas, and Compulsion, she had a nervous breakdown. She retired from acting and moved back to Vermont. Her contract with Fox ended in 1964 and she later began acting occasionally in films like Wild in the Streets (1968) and Bloody Mama (1970) with Shelley Winters. She died from respiratory failure in 1992 at age 54; she had suffered from Lyme Disease for several years.

Of course, the unsung star in Peyton Place is the town itself. Scenic and quaint from the outside, its secrets have attracted the interests of millions of readers and viewers. Carol Lynley played Allison in the 1961 sequel Return to Peyton Place, also based on a Grace Metalious novel. A popular prime-time TVs series followed in 1964 (click here to read our review of it). There was also a short-lived 1972-74 daytime drama and two made-for-TV movies: Murder in Peyton Place (1977) and Peyton Place: The Next Generation (1985).

Why all the interest in this small New England town? Perhaps, Constance sums it up best when talking to Mike Rossi in the first film: "In Peyton Place, two people talking is a conspiracy. A meeting is an assignation. And getting to know one another is a scandal."