Shadow Games and Other Sinister Stories of Show Business available for pre-order!

"Shadow Games is a page-turning, gut-wrenching barnburner of a book."—Robert Bloch 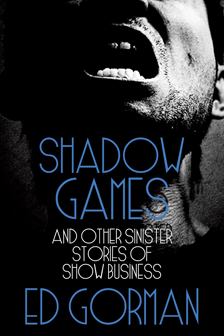 Ed here: My first cousin Bobby Driscoll was a major child star of the late 1940s and early 1950s. He died at thirty of drugs. While I don't use any of Bobby's life in this novel I do look at child stardom here. Theses a slightly revised edition of Shadow Games (1992) which I wrote at the time I was writing scripts for  two different directors and learning a little about the ways of Hwood.

"Shadow Games unflinchingly examines the dark side of humanity and reaches a finale that is both moving and terrifying."
—Ramsey Campbell

"What keeps you reading is not the traditional question of whodunit but the slick and artful ease with which Gorman portrays the alienated, uncaring world of his creation."
--The London Sunday Times

Cobey Daniels had it all. He was rich, he was young and he was the hottest star in the country. Then there was all that messy business with the teenage girl . . . and it all went to hell for Cobey.

But that was a few years ago. Now Cobey's pulled his life together again they're letting him out of the mental hospital and he's ready for his big comeback, but the past is still out there, waiting for him. Waiting to show Cobey a hell much more terrible than he could ever have imagined.

"Ed Gorman's is a strong and unique voice."
—Richard Matheson

"(Gorman) should be required reading for anyone who wants to experience the art of the short story as practiced by a master craftsman."
—Mystery News

"Gorman is the poet of dark suspense."
—The Bloomsbury Review

"This is a bleak moral tale but written with such hot feeling and such cool style that it entertains even as it keens."
—Morning Star (UK)


This brand new edition is available for pre-order from the Short, Scary Tales website. The first 100 copies sold direct from the site will be signed by me and the cover artist, JT Lindroos!