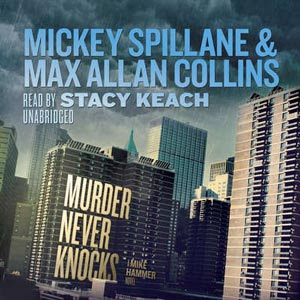 First off, I want to say how thrilled I am that QUARRY’S CHOICE has been nominated for a Barry Award (Best Paperback Original). Toward the bottom of this update will be links to the full list as well as some reviews.
Also, note the cover art for the audio of MURDER NEVER KNOCKS – just finished listening to Stacy Keach’s reading of the book, and it’s fantastic. Speaking of MURDER NEVER KNOCKS, if you’ve read and liked it, please post an Amazon review.
I am back writing these updates (after the four canned entries that appeared during the month following my open-heart surgery). For the next several updates, I am going to talk about my experiences of late, and you are welcome not to read them and to wait until I get back to books and movies and other “funner” topics. But this is on my mind, and I need to purge some.
A month ago today (as I write this) I had my operation, which involved a valve replacement, two bypasses and a couple of other let’s-keep-this-bastard-alive-while-we’re-in-here items. Of that first day, I remember nothing apart from getting wheeled in the operating room. Barb reports that several hours after the operation, I said, “I made it…I made it….” Shortly after that, like most of us with a pulse, I began complaining.
That night, in the ICU, I hallucinated that I was on a spacecraft and being held prisoner. I could see a long windowed-off corridor where futuristic nurses strolled, ignoring my cries of “Help!”
I remember little of the next two days. I know Barb and Nate were with me as much as possible. Apparently I was not a stellar patient. At some point I learned that my right arm and hand were (to use the medical term) fucked up. Basically the arm was weak and the hand felt like a bunch of sausages sticking out of a wad of mashed potatoes. After initial alarm, I wasn’t worried because I figured it would be temporary.
Various nasty things happened during the ICU stay, including getting tubes yanked out of me and the removal of a catheter. But nothing was nastier than the food. I am considering writing a cookbook called HOW TO SCREW UP TATER TOTS. What saved me was Barb, who was spending every afternoon with me, bringing me food from the outside.
The nurses were nice, very helpful, supportive and even sweet. My heart surgeon dropped by every day, and assured me my hand would “come back.” I gradually came to understand that this would include me working very hard to make that happen.
The worst part of the stay was the long nights. Something about my sleep cycle got screwed up as a side-effect of the heart surgery, so that I would sleep for half an hour and then wake up, thinking it was morning. I spent the nights alternating between reading and sleeping and watching movies on a portable blu-ray player and sleeping some more. Of course due to the surgery I had to sleep on my back. The bed was every bit as comfortable as a hotel-room couch fold-out affair. Nurses came in about once an hour to check vitals and give me tests on my lungs and the occasional pills. I hated these long nights and began begging Barb to take me home.
That wasn’t to be – my hand/arm problem required physical therapy and that meant I was headed to the fifth floor. While still on the seventh floor, I began walking (with a walker at first) and had some preliminary work on my hand. Barb spent many hours with me.
The night of the move I hallucinated again. I thought I was sleeping in a bed in a department store showroom that a nurse and an orderly were disassembling. Then they rolled me out of the showroom onto an elevator and down a hall and into a dark room where I was abandoned. I felt afraid, in fact terrified. I began to shout for help and when a kindly older nurse came in, I said I wasn’t comfortable staying here and wanted to call my wife on the phone. The nurse settled me down and I somehow got back to sleep.
NEXT WEEK: THE BEST HALLUCINATION YET

– – –
Here is a fantastic MURDER NEVER KNOCKS review from the great Ed Gorman (glad to have him back reviewing again!).
Here, at the Rap Sheet, is the complete list of Barry Award nominees.
There are several nice mentions of Nate Heller and me in this wonderful piece by Jeff Pierce at the Kirkus blog.
Here’s a short but nice piece on Mickey.
Finally, here’s a good if patronizing review of CARNAL HOURS. The reviewer seems put off by the sexual content – this continues to baffle me, and must be generational. One of the commenters, apparently a Heller fan, finds the novel the “weakest” of the series. I certainly disagree, and have often given it to readers who wanted to sample Heller, because it’s highly self-contained and has a real-life locked-room mystery.
M.A.C.
Tags: Awards, Carnal Hours, Mike Hammer, Murder Never Knocks, Nathan Heller, Quarry, Quarry's Choice, Spillane
Posted in Message from M.A.C. |  3 Comments »
Posted by Ed Gorman at 3:53 PM