[Nate here — Before we get to this week’s (pre-written) update, I thought I’d copy over a short post my dad made on his facebook page on Sunday.]
I have been home for five days. Barb is great, loving and supportive but keeping me in line. I face several months of rehab, mostly because my right hand is weak and sluggish. Can’t type much or even write my name. Not great for a writer/keyboard player. Outlook is good if I put in the work. Which I will. But I can’t properly thank you wonderful people for the love and support.
— 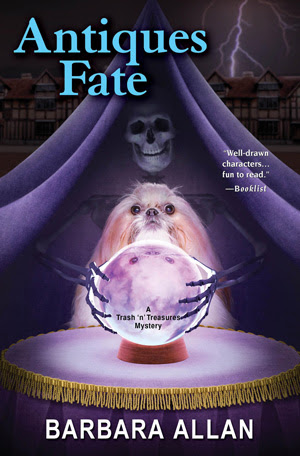 On the very same day that Pinnacle is publishing the hardcover edition of THE BIG SHOWDOWN, Kensington is releasing the hardcover of the new Trash ‘n’ Treasures mystery, ANTIQUES FATE, by Barbara Allan (Barb and me). This coincidence is made at least a little odder by Pinnacle and Kensington being two imprints of the same publisher.
FATE plays off “fete,” as the setting is not Serenity, Iowa, but Old York, Iowa…a quaint fictional village somewhat based on the Amana Colonies. The difference is that the Amanas have a German history, which they maintain to some degree, while New London is Brit-oriented, maintaining that slant to an almost absurd degree.
Barb and I both are big fans of all sorts of British TV mysteries, from MORSE to LEWIS, FOYLE’S WAR to SHERLOCK, MISS MARPLE to POIROT, GEORGE GENTLY to MIDSOMER MURDERS…among others. The picturesque hamlets of MARPLE and MIDSOMER inspired the Old York setting, and we had a great time playing off a type of mystery that we both enjoy.
We also found that readers responded well to ANTIQUES CON, with its New York setting (hence Old York, this time around). As much as fans enjoy visiting Serenity, we began to realize the series had been around long enough that a little variety was in order. So we decided to do another non-Serenity novel, and will probably do so again.
By the way, it’s very funny. It really is.
—
Here’s a lovely MURDER NEVER KNOCKS review from the great Bill Crider.
And this nice KNOCKS review from Crime Fiction Lover.
M.A.C.