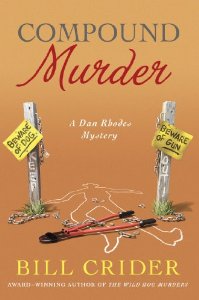 I once saw this series compared to "the Andy Griffith Show."  I suppose there are similarities in the small-town (Texas) atmospherics and a few antic characters but Bill Crider's version of the turf is much more sophisticated, funnier and snarkier. There's a definite wry even judgmental take on the this particular town.

Compound Murder is one of my favorite of the series because the plot--an English professor is found dead; later decreed murdered--has more than its share of twists and surprises and because between Academics and Survivalists who believe that Obama has hooves and a tale, Crider focuses some very sharp, witty writing on these respective worlds. Not to mention sneaking in some pop culture references
that really work.

Professor accused Survivalist's son of cribbing a paper he handed in. The son and the Prof got into a heated argument about it.  Suspect number one is introduced. Several more to come, of course,  each well-endowed with motive and denial. Wellington was not what you might call universally loved. Crider sneaks in a very nice procedural amidst the comedy and clamor.

Favorite scene: Sheriff Dan Rhodes' first visit to the Compound where the Survivalist chief dangles an AR-15 while he talks (he reassures Rhodes that he only uses it for hunting; that's reassurance?) and four dogs ("Leopard hounds") who don't seem the cuddly type despite being told otherwise.

As I said at the top, this is one of my favorites of the series. But then I like all of them. These deserve time on the best-seller lists.

I haven't read this one yet, but I agree the Dan Rhodes novels are terrific.

Mighty good series and I really enjoyed this one.