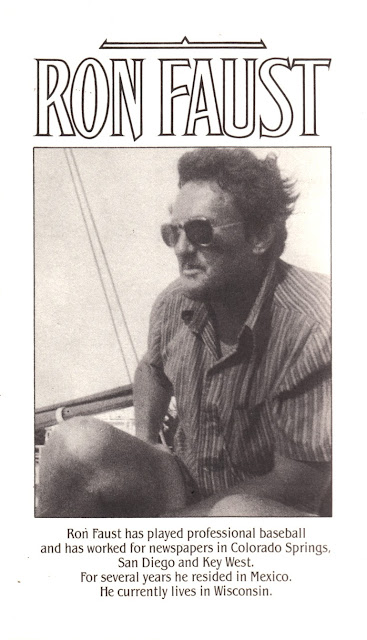 Ed here: I wrote about Ron Faust the other night. He really was one of the finest writers of my genration. Ben Boulden wrote me tonight about my post the other day. I'll run a bit of it here but be sure to go over to Gravetaping for the entire piece (written before he heard from Faust's agent).

Ed,
I thought you might like to know I heard from Ron Faust's literary agent, Jim Donovan, and he verified Ron died in 2011.  I don't know the details of his death (I asked in a follow up email), but JACKSTRAW is his final novel.
I also posted a short essay and his bibliography at Gravetapping.
Ben

Ron Faust is the best writer you have never heard of.  He was less
than prolific, publishing 15 novels over four decades, but the
novels he wrote were something special. He was compared
to Ernest Hemingway, Hunter S. Thompson, and
Peter Matthiessen by critics, but he never got the break
he needed, or his writing deserved.  His work leaned t
oward thrillers, but there was a substance, an atmosphere,
to his novels, which is uncommon in the genre.

Mr Faust’s work was published in bursts.  His first
six novels were published between 1974 and 1981;
the first two titles were published in hardcover by
the Bobbs-Merrill imprint Black Bat Mystery, and
the remaining four appeared as paperback originals from
Fawcett Gold Medal and Playboy Press.

The next five titles, probably his most commercially
successful, were published by TOR and its imprint
Forge between 1993 and 2001; each was published in
hardcover, and the first three were also published in mass
market.  Mr Faust’s name left the bookstore shelves for a
few years until Bantam published three novels featuring
Dan Shaw, a law student and working paralegal who a
lways found trouble, in 2004 and 2005.  The Dan Shaw
titles have been favorably compared with John D’s Travis
McGee, and he is Ron Faust’s only recurring character.

His most recent title is an adventure novel titled Jackstraw,
which was published earlier this year as a trade paperback
by the independent Turner Publishing, and I’m pretty
certain it will be his last.  The copyright for Jackstraw is
held by Mr Faust’s literary agent, and while I was unable
to find an obituary, get a response from his agent,
or find anyone who knew Ron Faust more than in
passing, I have the rotten feeling (and I hope I’m wrong)
Mr Faust is dead.

for the rest go here:
http://gravetapping.blogspot.com/

That's really depressing but not unexpected. Thank you for talking about Mr. Faust. I had never heard of him before. Now I will read his books.