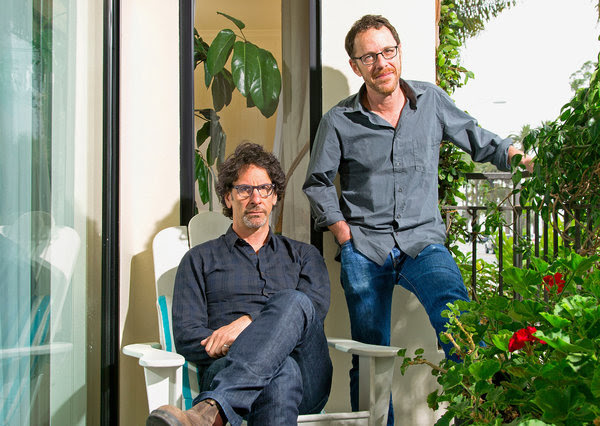 By MANOHLA DARGIS and A. O. SCOTT

When Joel and Ethan Coen were growing up, they used to make Super 8 films, including remakes of Hollywood movies that they had watched on TV. Since then, the Coens have continued to let their imagination loose while ranging wide across cinematic and literary genres, drawing on pulp literature (“Blood Simple,” “Miller’s Crossing”), screwball cinema (“The Hudsucker Proxy,” “Intolerable Cruelty”), Homer’s Odyssey (“O Brother, Where Art Thou?”), the Bible and their own suburban Minneapolis childhood (“A Serious Man”) to make movies that, increasingly, have the quality of an evolving, distinctly American mythopoeia.
In July, Manohla Dargis and A. O. Scott, the chief film critics for The New York Times, met with Joel Coen, now 58, and Ethan Coen, 55, in Santa Monica, Calif., to discuss their work, including their latest film, “Inside Llewyn Davis” (Dec. 6) about a 1961 folk singer (played by Oscar Isaac), who’s struggling with his music, the world, the changing times and — this being the Coens — his comically flawed humanity. The brothers sat across from each other and at times seemed to share a single (very large and fast-moving) brain. These are excerpts from the conversation.
Q. Can you talk about the genesis of “Inside Llewyn Davis”?
Ethan Coen We were in the office and Joel said, “O.K., suppose Dave Van Ronk gets beat up outside of Gerde’s Folk City. That’s the beginning of a movie.”
Joel Coen It was an idea we kept coming back to. We were thinking 1961 is interesting, because it’s the scene that Dylan came into, not the one he created or transformed, because people know more about that. Dylan once said something — and I’m paraphrasing him — “Really, all I wanted is to be as big as Dave Van Ronk.” That’s how limited that scene was, in terms of the people in the broader culture.
Did you grow up listening to that music?
Ethan Yeah, sort of, through Bob Dylan, like everybody else, probably.
Joel I’m a little older than Ethan, but I have very vague early memories of hearing folk music, my mother playing it or something, when I was fairly little.
Ethan We had a fantastic record of a concert, a rock concert, of Big Bill Broonzy and Pete Seeger, which is kind of ——
Joel Yes, that was a really early record that was a concert in Chicago, where Pete played. In fact, that’s how we met T Bone [Burnett]. T Bone called us up sort of out of the blue after he saw “Raising Arizona,” because he thought it was very amusing that we played Beethoven on banjo in the score in the movie. We said to him, “Well, we really stole that from Pete Seeger,” because Pete Seeger played that. We knew it from this concert record.
Ethan Oh, the one disclaimer I should’ve made when we talked about the genesis of the movie: We did start thinking about Dave Van Ronk, and in fact read his memoir, which is kind of great, “The Mayor of Macdougal Street.” But the movie’s not about Dave Van Ronk, although Oscar, the character, has his kind of repertoire. It’s his music. It’s a fictional character we gave his music to.
How did you find Oscar Isaac?
Joel After we wrote the movie and we started casting it, we knew that there was going to be a lot of performance in the movie, and that actually when you heard a song in the movie, we really wanted to hear the whole song. And it’s also a story where we felt like there’s got to be something about the character that you only know through his performance and his music — you know, like a real musician. So we only auditioned real musicians.
Ethan [Laughs.]
Joel You know, that was not so great. It’s often possible — sometimes it’s even easy — to get somebody like that through a scene or two scenes or three scenes or whatever, and it’s great, it’s fine. But this character’s literally in every scene in the movie, so we realized we were going the wrong direction, and we just started seeing actors who could play, as opposed to musicians who could act. And there are more of those, by the way.
Ethan And we’ve been doing this like, 30 years. You’d think we know something as basic as this, that you need an actor.
Joel I know. It was a little insane. Oscar came in and he said, “Most actors, if you ask them if they play guitar, they’ll say they played guitar for 20 years, but what they really mean is they’ve owned a guitar for 20 years.” Oscar’s actually played guitar since he was little little, you know? He played, and we sent the tape to T Bone, and T Bone said, “This guy’s actually a better musician than a lot of the studio guys I work with.” So we went, “We found him.”
for the rest go here:
http://www.nytimes.com/2013/09/08/movies/the-coen-brothers-look-wryly-at-their-films.html
Posted by Ed Gorman at 11:49 AM

I cannot wait to see this. There have only been two of their movies I didn't care for LADYKLLERS and the one with Brad Pitt as a goof. Can't remember the name.