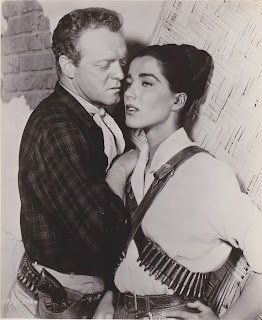 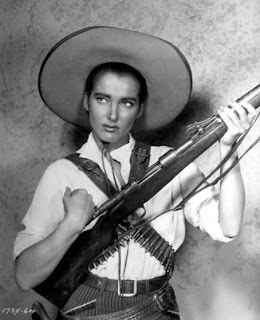 For Hollywood, the 1950s and 60s were the era of the blonde bombshell.  But it was also a time of some striking brunettes, and few made a more lasting impression than the lady whose long black tresses and white one-piece swimsuit made her Fay Wray to THE CREATURE FROM THE BLACK LAGOON, Julie Adams.

But Julie Adams was much more than catnip to a 3D lizard; a stunning beauty with a sultry voice that could portray sincerity or scheming, she always portrayed intelligence.  She was the thinking man’s western beauty, and her characters were rarely the type who just reloaded while her man fired out of the cabin window.  In at least fifteen Western features and dozens of Western TV episodes, she played the sort of strong three-dimensional women that previously only Barbara Stanwyck got to play – and sometimes she played them with Barbara Stanwyck!

And speaking of three-dimensional characters, she starred in two 3D movies, both of which are being featured in the WORLD 3D FILM EXPO III, which opened on Friday night at the Egyptian Theatre in Hollywood, and will run for ten days.  CREATURE FROM THE BLACK LAGOON played on Saturday night, and on this Friday afternoon at 3:30 pm, WINGS OF THE HAWK will be shown.  This Budd Beotticher-directed classic is rarely seen in any version, and it’s been years since it played in 3D.   Miss Adams, who stars with Van Heflin in the film, will attend, and take part in a Q&A.  She will also be signing her autobiography, THE LUCKY SOUTHERN STAR – REFLECTIONS FROM THE BLACK LAGOON, which I will be reviewing here shortly.  In it she discusses, along with CREATURE, and her other films, all of her Western movies, and many of her TV appearances.

After some parts in early live TV, and before she became a contract star at Universal, she cut her celluloid teeth working in Westerns for the small independent, Lippert Pictures.  She graciously spent an hour talking to me until she had to rush off for her BLACK LAGOON screening.

HENRY PARKE:  Miss Adams, it’s great to talk to you.  I’ve been a fan of yours for a long time, and oddly enough, I like your westerns even more than I like THE CREATURE FROM THE BLACK LAGOON.

JULIE ADAMS: Well that’s great, because I love doing westerns.  I loved seeing western movies when I was a kid, so my dream came true, and I actually got to act in westerns, and ride those beautiful horses.

HENRY:  Before you started acting in them, what westerns did you like in particular?

JULIE:  I loved them all.  I went to Saturday westerns mostly, with different stars, but I was more in love with the horses than the actors.  I loved the stories, I loved the outdoors.  I just loved it all.

HENRY:  Don Barry’s always been a personal favorite of mine.  What was he like to work with?

JULIE:  I loved to work with him; he was wonderful.  A very nice fellow, extremely polished in the western genre.

HENRY:  You did a half dozen Westerns for an independent company, Lippert Pictures, in 1950.  I understand that they were shot simultaneously, with the same casts.  They’d do the saloon scenes for all six films, then the ranch house scenes for all six, and so forth. That must have been a crash course in acting.

JULIE:  Well, it was exciting.  Because we did six or seven westerns in just five weeks.  So it was exciting, and it was extremely concentrated.  It was great training for me, because you didn’t have time to think about things too much; just went and did it! (laughs)  I went out and took some riding lessons before I started.  Within the western genre, the horses that are trained for westerns are so easy to ride; you can guide them, and they respond to anything you do, whichever way you want to go.  Horses can really make you look good.

HENRY: In 1952 you were under contract to Universal Pictures, and you starred with Jimmy Stewart in one of the legendary Stewart and director Anthony Mann collaborations, BEND OF THE RIVER.  Which was quite a substantial step up from Lippert.  What was Anthony Mann like to work with?

JULIE:  Anthony Mann was really a wonderful director.  He knew what he was doing, and he knew what he wanted, and he made you feel very secure.  You had a good man at the head of the chain.  Everything he directed you to do made sense.  He really knew the western genre so well.  I was very happy working with him; I loved doing BEND OF THE RIVER, and of course to work with James Stewart was great.

MUCH MORE TO COME:
http://henryswesternroundup.blogspot.com/2013/09/interview-with-julie-adams-universals.html
Posted by Ed Gorman at 11:47 AM