Ken Levine
Named one of the BEST 25 BLOGS OF 2011 by TIME Magazine. Ken Levine is an Emmy winning writer/director/producer/major league baseball announcer. In a career that has spanned over 30 years Ken has worked on MASH, CHEERS, FRASIER, THE SIMPSONS, WINGS, EVERYBODY LOVES RAYMOND, BECKER, DHARMA & GREG, and has co-created his own series including ALMOST PERFECT starring Nancy Travis. He and his partner wrote the feature VOLUNTEERS. Ken has also been the radio/TV play-by-play voice of the Baltimore Orioles, Seattle Mariners, San Diego Padres. and has hosted Dodger Talk on the Dodger Radio Network.

It did benefit a very worthy cause, the Muscular Dystrophy Association. The videos of the kids were both heartbreaking and inspiring. Let’s hope someday there’s a cure.

But the JERRY LEWIS TELETHON was the absolute height of entertainment cheese, a time warp to a Las Vegas scene that everyone but Jerry realized had long since passed, and was the home of the most insincere sincerity that only show business could create. The treacle just oozed out of your speakers. Born in the swinging ‘60s, nurtured by Sammy Davis Jr. (combining over-concern, hipness, gross sentimentality, and jewelry), this style was perfected by Jerry Lewis who added his own special touches. No one could beg with such passion while sticking a cigarette in his ear. No one could deliver a biblical sermon, break down crying, then go into his spastic character for comic relief.

The French call him Le Roi du Crazy. They still shortchange him. Since his auteur movie days he has developed his own unique and delicious blend of condescension and humility. Every year I knew what I’m going to get and was always richly rewarded. 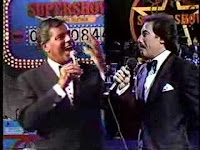 One year Jerry called local New York co-host, Tony Orlando: “Only the best Puerto Rican to ever come to this country.”

Now how could you NOT love that???

Nowhere did superlatives fly like the JERRY LEWIS TELETHON. In only one half hour I caught “infamously wonderful”, “exceptional talent”, “most talented”, “most amazing”, “most exciting”, “unmatched”, “extraordinary”, “a true legend”, and “a treasure in every sense of the word.”

Give the man a hand. James Lipton can’t lavish praise like that.

On to the fall!