Ed here: As most of you have figured out by now I'm a big fan of the Randolph Scott-Budd-Boetticher movies made at Warner Brothers in the 1950s. I was Googling the writer of most of those films Burt Kennedy when I came across an amazing movie site called Greenbriar Pictures. There's no other site with the scope and depth of movie history. Check this site out right now.

by JOHN MCELWEE at Greenbriar for the entire article go here: http://greenbriarpictureshows.blogspot.com/search?q=randolph+sctott

Scott was the constant current running beneath "A" westerns flourishing after the war. He’d gone over completely to cowboy parts,profited handsomely on many he produced, and passed shooting breaks conferring with stockbrokers. There were ongoing deals with Warners and Columbia, permitting Randy to knock off four and sometimes five a year while bigger names like Wayne, Stewart, and Cooper limited western output and spent themselves as heavily hammering out percentage memos and negative ownership. Scott was on and off jobs within three or so weeks and traveled no further than Lone Pine to finish yearly quotas. He was unstoppable in small towns and all his shows met payroll. His Southern accent was apple butter to kinsmen here in North Carolina where Scott grew up, and no frontiersman came more credibly of times and places his westerns depicted. You figured any Scott character for recent service with the Confederacy, and though his cowboys were square shooters, they never came across as square. 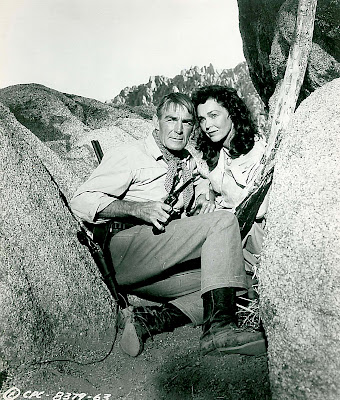 Bob Thomas told a priceless Jack Warner anecdote in his biography of the studio head that neatly sums up declining fortunes of medium-budget westerns by the mid-fifties. Warner had gathered his line producers and lower execs to map out the year’s program. We’ll make the usual number of Randolph Scott westerns at seven hundred and fifty thousand apiece. We can always count on rentals of a million and a quarter, he said. Could I make a suggestion?, asked a young man in the room. Why not spend a million dollars on the Scott westerns? With improved quality, maybe they could bring back two million, he said hopefully. Kid, you’re fired, replied Warner. I’ll tell you why you were fired. Those westerns are a dying market. The public is getting all the shit-kickers they need on our TV shows. Now if you had said, "Why don’t we make the Randy Scott westerns for half a million?", I would have made you my assistant. This, unfortunately, was the backdrop against which Seven Men From Now was produced, for by then Scott grosses were declining. Warner’s most recent with him, Tall Man Riding (1955), barely cracked a million in domestic rentals, while across-town Columbia saw just $777,000 from 1956’s 7th Cavalry. WB did try economizing to the extent of shooting in-house Shootout At Medicine Bend in black-and-white the following year, an act punishable in this instance with domestic rentals lowest of any so far --- $655,000. Budgets and profits both fell as tele-cowboys rose, with WB enthusiastically competing with itself. Cheyenne was breaking big on ABC by 1956-57, having gone to new episodes every other week after an initial season among revolving wheels on the failed Warner Brothers Presents, and Maverickwas in preparation for a 1957 premiere. "B" westerns had been wiped off industry production charts for several years as cowboys migrated to television, and many of Randolph Scott’s oldies were turning up there as Seven Men From Now opened in August 1956. This was the new team’s first project (minus Harry Joe Brown, who’d be back when they moved to Columbia), Burt Kennedy having brought his original script to John Wayne’s Batjac company (its product distributed by Warners), with Scott and Boetticher added at Wayne’s instigation. The star was himself reluctant to do another western so soon after The Searchers (a decision he’d regret after seeing how well Seven Men turned out), and besides, a modest negative cost ($719,000) could not have been maintained with Wayne in the lead. Boetticher recalled JW’s fury when a preview of Seven Men found it playing to an audience who’d come to see Serenade with Mario Lanza. Trade reviews were favorable, but counted little among showmen who regarded most westerns as interchangeable at best. It was immaterial which Randolph Scott "shit-kicker" was which, as long as prints were available and bookings cheap. Seven Men From Now did gross better than Scott’s recent ones at Columbia, but with final tallies of $989,000, it represented the first of his Warner released westerns to fall below a million in domestic rentals.
Posted by Ed Gorman at 1:40 PM

Try this link. It'll take you right there: