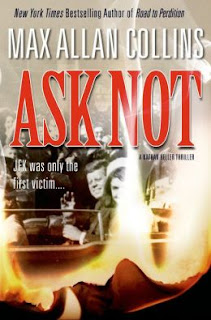 On the day Jack Kennedy was killed, I was sitting home with my father watching TV and eating an early lunch. In an hour or so I'd be headed back to school. I was then a part-time college student and part-time bag boy at a supermarket. I was also intensely political and even more intensely a left wing labor Democrat. I'd walked dozens of picket lines from five years on and frequently traveled to Iowa City to hear many left speakers talk.
As I recall my father and I watched each successive network Breaking News story with increasing disbelief. This was after all America. Things like this just didn't happen here.
Reading Max Allan Collins' latest Nathan Heller novel, ASK NOT,
all my memories of that bloody day and night returned as if I was paging through a scrapbook of nightmares.  The rage, the sorrow, the impotence.
ASK NOT is Collins' take on the suspicion many of us still feel after being lied to by the Warren Commission.
And as Collins captures so well in this brilliant book, the suspicion that remains to this day.
The book teems with real people in the saga--everybody from the legendary including Robert Kennedy to most suspicious player of all, Jack Ruby. It is with no less a person than the late and controversial columnist Dororthy Kilgallen (here Flo Kilgore) that he joins forces to investigate the killing.
Collins cleverly ties this book back to the previous Heller novel TARGET KILLING. In fact in a chilling scene Heller and his sixteen year old son are almost run down by someone from that novel.
The consummate craftsman has once again moved in on the turf of the late Richard Condon in this powerful, rich and ultimately disturbing novel.