HALF IN LOVE WITH ARTFUL DEATH by Bill Crider 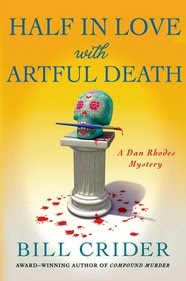 Every time I finish one of Bill Crider's fine novels about small town Texas Sheriff Dan Rhodes, I think I've just read the finest one yet. So let me say that HALF IN LOVE WITH ARTFUL DEATH (which is an excellent title by the way) is Crider's most nuanced, wry, sly and entertaining Rhodes adventure yet.
Here's why (and I mean not just because there's a hilarious scene of Rhodes having to lasso a donkey)--Crider has created a series that is as droll and laid back as the "Andy Griffith Show" but is not  superficial. Beneath the wonderful humor the Rhodes books give us realistic depiction of humanity in a small Texas town.
Take Burt Collins the irritating jackass who instigates not only the book's set up but also the mystery. Every small town has at least one Burt Collins--and irritating and irritable man who imposes his opinions and sanctimonious judgements on everything and everybody. And they do this without shame, seemingly unaware that their public pronouncements are embarrassing and laughable. He's a buffoon but Crider subtly shows us that he's more, a dangerous man in his simpering way.
This time Collins is complaining about the artists who've shown up to take lessons from two instructors. He claims they're not the kind of people who should be here. More, he pronounces their work terrible and their attitudes sinful. When their work is defaced Collins is the number one suspect. After all he's long been suspected of other acts of vandalism in the past.
Crider makes all his this own by having Rhodes being as baffled by some of the artwork as Collins is. But Rhodes, being a professional law man, keeps his opinions to himself and soldiers on.
In the course of his murder investigation, Rhodes is distracted by other cases (in case you thought that lassoing donkeys was all he had to contend with) including a naked woman displaying her wonders publicly, convenience store robberies and meth dealers. The latter is an example of the grit Crider always brings to his Rhodes books. Meth is a scourge on our society. No pratfalls here.
Bill Crider is a very gifted writer who deserves a much larger audience. The prose here is crisp and even eloquent in places. The characters while comic (the amateur investigator Seepy Benton being my favorite) are never cartoons and the world he gives us is detailed with a journalist's eye. And has blunt force trauma ever been inflicted by a more symbolic weapon (for a small Texas town) than the bust of NASCAR legend Dale Earnhardt, Junior?
So whether you're returning to the series or just starting it, you'll enjoy seeing a master storyteller working at his very best.