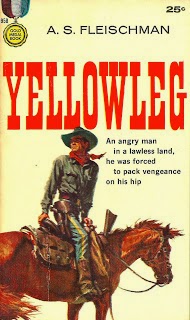 Ed here: I wish Cullen Gallagher was blogging on his great site Pulp Serenade everyday, too.
In the meantime Cullen's given my permission to reprint pieces from the past.

Yellowleg is in my top ten western favorites. As A.S. Fleischman Sid Fleischman (yes one of the beset selling children's writers of all-time) he wrote suspense for the Likes of Ace and Gold Medal.
It shows in the book. The power of the characters and the storyline was turned into a first class western movie as Cullen indicates below.

The Civil War has been over for many years, and a prospective bank robbery has forged a bond between former enemies. There are the two Rebels – the anxious gunhand Billy and his older mentor Turk – and the Yankee, a mysterious man named Yellowleg who is short on words and quick on the draw. As they enter Gila City, it is clear the group has divergent motives: Turk has his eye on the money, while Billy is keen on the dance hall girl Kit, and Yellowleg has his sights on revenge for someone who nearly scalped him during the war.

Like the best of A.S. Fleischman’s Gold Medal novels (such as the South Seas thrillers Malay Woman and Danger in Paradise), Yellowleg’s driving plot quickly veers off the conventional path and goes in unexpected directions, repeatedly adding new twists to the story and its characters. What begins as a heist story morphs into a revenge quest, and Fleischman takes the narrative on yet another detour with Kit and her son, Mead. Such surprises keep the story fresh and engaging, but most importantly they come off as natural evolutions and never seem forced or contrived.

Fleischman takes a similar approach to his characters, putting distinctive spins on Western archetypes. Kit seems particularly modern. She’s a single mother who began working in a dance hall after her husband was killed during an Indian attack. Despite the lurid rumors spread by the townsfolk, Kit is not, and never was, a “parlor girl.” Strong and self-reliant, she never pities herself or expresses any shame about the life she was forced to take. And unlike “Mike,” the gun-toting female from W.R. Burnett’s Stretch Dawson, Kit doesn’t throw away her independence once a man forcefully takes her into his arms. It was refreshing to see a feminine character that couldn’t be won over by masculine strength or sexuality.

In 1961, the year after Yellowleg was published, Fleischman adapted his own book to the screen as The Deadly Companions. It was the first film by a young man who would go on to become a luminary in film history: Sam Peckinpah. Maureen O'Hara and Brian Keith played the lead roles, and I thought it was a terrific adaptation that really captured the spirit of the book. I've posted the video below, or you can watch it for free on Archive.org.

As always, a few of my favorite quotes from the book:

“Maybe the trouble with revenge was the day you caught up with it.”

“Her beauty struck him as a fragile, hopeless thing; out of place and unexpected in a dried-up little New Mexico town. It reminded him of the bloom of mountain cactus which opened its petals for a brief display in the night and then withered and browned in the next day’s heat.”

“There was no pain, only the memory of it, and the fear of it, but it kept him from squeezing the trigger.”

“But a man needs something to live for, even if it’s just to kill another man.”

Read THE VENETIAN BLONDE, have a few others on my shelf, including SHANGHAI FLAME and LOOK BEHIND YOU, LADY.

Those are fine quotes. An artful wordsmith.