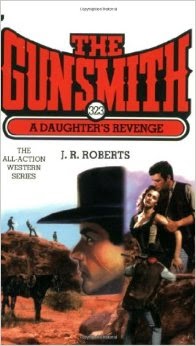 OUR MAN CLINT
The Gunsmith Continues
By Robert J. Randisi, aka J.R. Roberts

It was a bloodbath, probably fitting, given how long adult westerns and mens adventure paperbacks have been spilling blood within their pages.  But in one fell swoop publishers, with seeming disregard for the readers—or the readers that were left, anyway—cancelled all the Adult Western series—notably the long running Longarm and Gunsmith series—and mens adventure series—most notably, the Mack Bolan series.  This move, as of April of 2015, will not only rob loyal readers of the adventures of Custis Longarm and Mack Bolan, but will also put entire stables of writers out of work. Both series, along with many others, were written by multiple writers, having supplied work for many working writers for a good 40 years.  In fact, the Adult Western genre not only invigorated the western genre and kept it alive,but provided income for dozens of writers over the years. And now it’s the end of an era for all of them . . .

Very simple answer. For the most part, the Gunsmith was created and written by one man. When Charter Books contacted me in 1981 and asked me if I could create an Adult Western series for them, I jumped at the chance.  I created a bible and, when it was approved, signed a two book contract.  Then a contract for a third.  And then they called me and said they wanted to go into the genre whole-heartedly, and could I write a book a month.  I was 30 years old, had no idea if I could write a book a month, but I said “Yes!”

I started writing under the pseudonym J.R. Roberts.  When I attended my first Western convention I discovered what anomaly the Gunsmith and I were. There were several other monthly adult westerns running at the time, and they were being written by three or four writers under a single house name. A “house name” is a name used by many authors on one series.  My “J.R. Roberts” nom de-plume was a pseudonym used by one person, not a house name. (It was only after Berkley Books purchased Charter Books and wanted to keep the Gunsmith going that they asked if they could hire two more writers, just to build up an inventory. The writers were to be approved by me, and I was to own even those books which I did not write, and receive a royalty. It made me even more of an anomaly in the genre. Once we had built up a one year inventory, I went back to writing all the books.)

And I have done so since then, for over 32 years.  Gunsmith #1: Macklin’s Women came out in January of 1982, and there has been a Gunsmith every month since then.  Berkley Books decided to end the run in April of 2015 with #399, and I was given enough warning so that I was able to place the series elsewhere and assure that Gunsmith #400 would appear in May of 2015, with no break in the action.  They will appear with a new cover design in ebook for from Piccadilly Publishing, and in paperback from Western Trailblazers.  And Our Man Clint will go on appearing in a book a month for as long as my flying fingers can flex.

So to those loyal Gunsmith readers who pick up up each and every month, you may continue to do so, with heartfelt thanks from me, and from Our Man Clint Adams.

I should also thank Charter Books, where it all started, and then Berkley Books, which has kept the series going all these years, as we all move on to the next bend in the road.
Posted by Ed Gorman at 12:58 PM