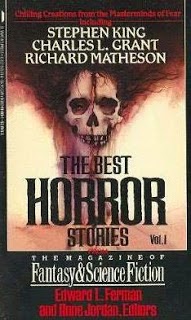 "Nina" by Robert Bloch
Posted: 28 Mar 2015 02:37 PM PDT
Robert Bloch is a legend. He is popularly known as a horror writer, but his production was wide and impressive. He wrote extensively in the crime, science fiction and horror genres. He had a particular skill at taking the style of one genre—hardboiled crime—and mixing it with the theme and expectations of another genre—horror. Think Psycho .

I recently read his short story “Nina” and I was impressed (to say the least). Nolan is an American running a plantation in the wild country of Brazil. The closest city: Manaus. The plantation’s only access is by boat, and Nolan isn’t completely comfortable with the workers. It’s not that they don’t work well, but rather it is their ceaseless drumming during the night. Add the heat. The humidity. The mosquitoes. And Nolan is a miserable man.

His life on the plantation changes when a woman appears. She is unknown to the local workers, and Nolan’s translator, Moises, calls her an “Indio” and “savage.” She soon becomes Nolan’s bedmate, and when his wife and child arrive to visit, Nolan’s world is shaken on its head.

“Nina” has all of the elements of a terrific horror story: a foreign and exotic location; a creepy and dark fabric; mysticism; outright strangeness; and a violent, and very peculiar, loss. It is very much horror, but it is brilliantly delivered with hardboiled prose, which provides a raw power—not to mention forward momentum—many horror stories lack:

“After the lovemaking Nolan needed another drink.

“He fumbled for the bottle beside the bed, gripping it with a sweaty hand. His entire body was wet and clammy, and his fingers shook as they unscrewed the cap. For a moment Nolan wondered if he was coming down with another bout of fever. Then, as the harsh heat of the sun scalded his stomach, he realized the truth.”

“Nina” is one of the better genre stories I have read. Its power is heady and visceral with a shadow-like quality; the narrative creates a shifting, soft focus, of the events. The characters feel real and the narrative is perfect. It captures the essence of the story and delivers it with an impressive blend of force and jaded subtlety most writers never achieve.

“Nina” originally appeared in The Magazine of Fantasy & Science Fiction in 1977. I read it in the anthology The Best Horror Stories Volume 1 edited by Edward L. Ferman and Anne Jordan. It was published by St Martin’s Press in 1988.

This was originally posted February 6, 2009, but since I have read a few Robert Bloch short stories recently, and reviewed his fantastic “The Hell-Bound Train”I thought it would be interesting to find some of my prior writings about Mr Bloch’s work. I also reviewed his stories “The Real Bad Friend” and “Lucy Comesto Town” in 2014.