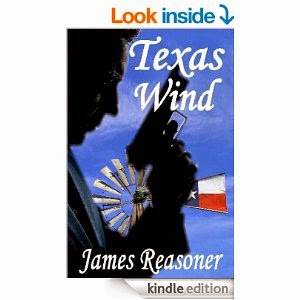 Ed here: As I've told James many times his private eye writing is among the
finest, the very finest, of his generation.  Many many people agree with me.
James has a number of short fine p.i. stories on Kindle. Read those, too.

James Reasoner may open Texas Wind (Manor Books, 1980) with the Private Eye’s iconic visit to a potential client, the initial gestation to many a detective narrative (shades of Marlowe in The Big Sleep), but this is 1980, and just as the world is a different place than it was in Chandler’s time, the private detective is also a different person. Midway through Cody’s investigation into the disappearance of college student Mandy Traft, he is given a telling warning that immediately separates his character from the classic milieu of Marlowe, Spade, Hammer, Scott, or any of their veteran pulp colleagues. “I’d hate to have to file a report listing you as the victim. This isn’t the wild days anymore. Take it easy, okay?” Reprehensible, vulnerable, fallible, imperfect – perhaps the best word to describe Cody is the simplest of all: human.

As Ross Macdonald notes in his On Crime Writing, “Throughout its history, from Poe to Chandler and beyond, the detective has represented his creator and carried his values into action in society.” This is one of the unique appeals of the genre: the detective figure is pliable enough to be at once distinct and yet firmly part of a larger tradition. It is a difficult feat to balance a sense of history and remain independent, but Reasoner does it marvelously.

Like the great detectives, Cody is an anachronism. His perceptive cynicism marks him a realist in a fantasy world, and his values give him a sense of grounding while those around him flounder in meaninglessness. He immediately recognizes the phoniness in Mandy’s stepmother (who claims to be “friends” with her) and her friend Lisa (who pretends there is no sexual tension between them and Jeff, the third member of their musical group). He also empathizes with their need to cling to these facades when Mandy’s disappearance brought one glaring, unpleasant truth to the surface: no one was as intimate or close as they once thought. This was the closest thing they had to family and friends, and with Mandy gone, the charade can’t support itself, nor can it give meaning to their lives.

As for Cody, he may be a hero for trying, but even he realizes he’s a fool for thinking he could enact change in a world that is irreversibly changing. He makes mistakes, and he pays for them – and so do others. His few attempts at gung-ho heroism go terribly wrong. And when he ignores gut instinct to inform the police about the kidnapping and ransom request, you begin to wonder whether the attributes of detectives of yesteryear (bullheaded independence, reckless egoism, total disregard for law and order) are as admirable as we once thought. As readers we want to believe in Cody’s decisions, and believe that everything will turn out for the best in the end. We want the myth of the Private Detective and his personal agency to win out against an increasingly oppressive world. By the end of the book, however, even Cody isn’t convinced of this anymore. The weight of reality is just too hard to ignore.

In the midst of all of this despair is a life-affirming sense of humor. (A favorite observation is: “When we were back in the car, I noticed that Janice wasn’t sitting as close to me as she had before. The price you pay for carrying a human finger in your pocket, I guess.”) There’s real warmth to his characters’ interactions, and just as much fire when they’re fighting. For his first book, James Reasoner created a Private Eye novel as classic as it is modern, and fans of the genre are sure to enjoy the deft storytelling and rich characters it has to offer.

Here are just a few more of my favorite lines:

“I woke up to sunshine coming in the window and the smell of bacon cooking. I understood what people meant when they talked about waking up and thinking they were in heaven.”

“Her guilt on top of mine was like thick dust in the air, making it hard to breathe.”

“Maybe the problems of youth didn’t seem quite so important as you got older, but that didn’t mean they were less than earth-shaking for the people going through them. Everybody’s problems are important at the time.”