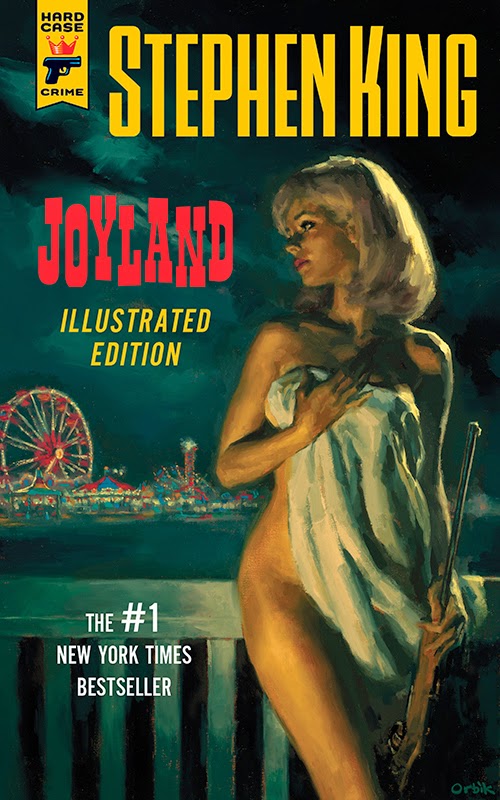 – Hard Case Crime, the award-winning line of pulp-styled crime novels from editor Charles Ardai and publisher Titan Books, announced today that in September 2015 they will publish a new illustrated hardcover edition of their bestselling title of all time, Stephen King’s JOYLAND.

The acclaimed coming-of-age story set in a possibly haunted small-town amusement park spent more than 25 weeks on the New York Times Best-Seller List in paperback and ebook format. Aside from certain extremely limited editions for collectors, however, no hardcover edition of the book has ever been published. The new edition will feature a brand new cover painting by popular Hard Case Crime artist Glen Orbik, whose other covers for the series include books by Gore Vidal and Michael Crichton; a map of the Joyland amusement park illustrated in the classic ‘mapback’ style by Susan Hunt Yule; and more than twenty interior illustrations by acclaimed artists Robert McGinnis, Mark Summers and Pat Kinsella.

Since its publication, JOYLAND has won raves worldwide. The Washington Post called it “a moving, immensely appealing coming-of-age tale” while Canada’s National Post called it “a small marvel of a book, a novel of loss and heartbreak, of growth and discovery…one of the writer’s finest works.” Entertainment Weekly called it “some of King’s most graceful writing”; the New York Times wrote, “The book delivers chills [and] a mournful sense of life’s fragility”; and the Guardian in the U.K. called it “a far gentler, deeper, more thoughtful book…and all the more intriguing for it.”

About Hard Case Crime Called “the best new American publisher to appear in the last decade” by Neal Pollack in The Stranger, Hard Case Crime has been nominated for and/or won numerous honors since its inception including the Edgar, the Shamus, the Anthony, the Barry, the Spinetingler, and the Ellery Queen Award. The series’ books have been adapted for television and film, a TV series based on Max Allan Collins’ Quarry novels in development by Cinemax and the TV series Haven in its fifth season on SyFy. Recent Hard Case Crime titles include James M. Cain’s lost final novel, The Cocktail Waitress; eight lost novels written by Michael Crichton under the pseudonym “John Lange”; and Brainquake, the final novel of writer/filmmaker Samuel Fuller. Hard Case Crime is published through a collaboration between Winterfall LLC and Titan Publishing Group. www.hardcasecrime.com Stephen King’s JOYLAND: The Illustrated Edition 2 About Titan Publishing Group Titan Publishing Group is an independently owned publishing
Posted by Ed Gorman at 2:27 PM

JOYLAND is a great Stephen King novel. I'm glad to see it getting more play.