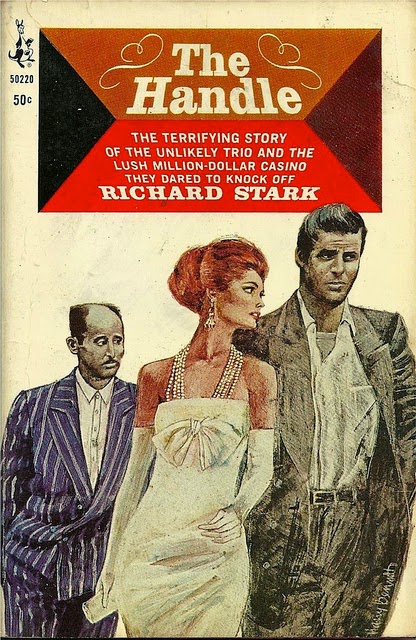 Hard to know if a book was a fairly easy go for the writer or if it drove him to drugs and e-porn. I hope The Handle by Richard Stark was a pleasure for Donald Westlake to write because it sure is a pleasure to read.

The Organization has decided that it's tired of this German guy running his big casino on an island in the Gulf of Mexico. He's beyond the jurisdiction of the Feds and it's unlikely Cuba will do much about him. Thus Parker is hired to take the casino and its other buildings down--literally. To blow them up.

Now while The Handle is every bit as tough as Dick Cheney's heart, the hardboiled aspect is played off against the sorriest group of human beings Parker may ever have had to work with. And the sardonic way Westlake portrays them had me laughing out loud at several points.

Take your pick. There's the alcoholic hood who talks as if he's auditioning for a Noel Coward play; the mob gun dealer who had to quit drinking several months ago and has increased both his cigarette intake (four or five packs a day) while maintaining both his cancer cough and his enormous weight; the pedophile who turns out to be a ringer sent to spy in Parker and his friends; the Feds who are so inept both Parker and Grofield play games seeing who can lose their tails the fastest. And then there's the the married Grofield, Parker's professional acting buddy, who never passes up a chance to impose his charms on willing women. In this case he endeavors to put the whammy on the very sexy blonde Parker himself has been shacking up with. Isn't that called bird-dogging?

And then we have Baron Wolfgang Freidrich Kastelbern von Alstein, the man who owns the island and the casino and who, over the years, has managed to make The Third Man's Harry Lime look like a candidate for sainthood. Westlake spends a few pages on the Baron's history and it becomes one of the most fascinating parts of the book, especially his days in Europe during the big war.

The book is filled with the little touches that make the Stark books so memorable. My favorite description comes when Parker and the sexy blonde sit down to a dinner that Westlake describes as "viciously expensive."