Great essay on ON Dangerous Ground 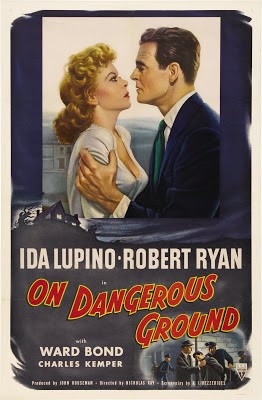 Editor's note: This edition of Noir of the Week is by clyderfro. He has an amazing website devoted to classic films that shouldn't be missed.

Superlatives are easy and get us nowhere. In intellectual property law, the dilution of a brand name to the point where it's synonymous with the actual product is commonly referred to as "genericide." The result is for the trademarked name to become essentially worthless, harboring no actual value due to its overuse. The same should go for sliced-out blurbs that deem something, often a movie, to be "great" or "amazing" or, heaven forbid, "powerful." If you hear these words enough, they lose any and all meaning. It tells us nothing aside from one person's struggle with a limited vocabulary of populist signal phrases.

If Nicholas Ray still made movies today, considering the vast number of blurb-happy reviewer monkeys, he'd have no problem rounding up a few eager admirers with bylines. Lot of good that does him now. Those guys were nary to be found during his time in Hollywood. When he started out at RKO in the late 1940's, audiences hardly noticed the unique auteur stamp he applied to his very best films. His debut They Live by Night sat on the shelf for months before getting a quiet, unnoticed release. Critics too were not entirely enthusiastic in his native country. If he had a champion among the American contingent of reviewers, I'm not aware of who it'd be. Years later, Andrew Sarris picked up the ball, but he didn't originate the play. Overseas, it was the French, specifically the lads at Cahiers du Cinema, who were responsible for elevating Ray to the status of major filmmaker. Jean-Luc Godard put Ray's Bitter Victory as his top film of 1957, ranked The Savage Innocents #2 in 1960, and had Bigger Than Life at number 7 in his list of the best American sound films that was published in the last issue of 1963. The periodical also put Johnny Guitar, Rebel Without a Cause and Bigger Than Life in its year-end top 10 lists. How did Ray fare stateside? He picked up an Oscar nod for Best Writing on Rebel in 1956. That's it. By the end of the decade he was done in Hollywood, essentially unemployable and on his way to a heart attack on the set of his last studio-financed film, 1963's 55 Days at Peking. He'd go on to teach at New York University, where his most famous alum was the director Jim Jarmusch, before succumbing to cancer in the summer of 1979.

The movies, of course, remain, and gloriously so. Ray's decade was the 1950's. You can look at and appreciate the output of Hitchcock or Billy Wilder or anyone from Sam Fuller to Douglas Sirk, but the '50s were Nick Ray's. No other director working in Hollywood was able to place America on the screen like Ray did. Our postwar fears, the veneer of happiness when disenchantment lurks barely beneath the surface, the basic decency we all struggle to maintain and the mistakes we're doomed to make - these subjects fascinated Ray and they reveal themselves in the subtext of all his best efforts. After They Live by Night, Ray got kicked around by RKO and eventually jumped to Columbia for a couple of Humphrey Bogart pictures. He made one of his best films there, arguably his masterpiece, with In a Lonely Place in 1950. He then returned to his home turf of Howard Hughes' RKO to helm On Dangerous Ground, inspired by a British novel by Gerald Butler called Mad with Much Heart, which Ray had read prior to filming Born to Be Bad in 1949.