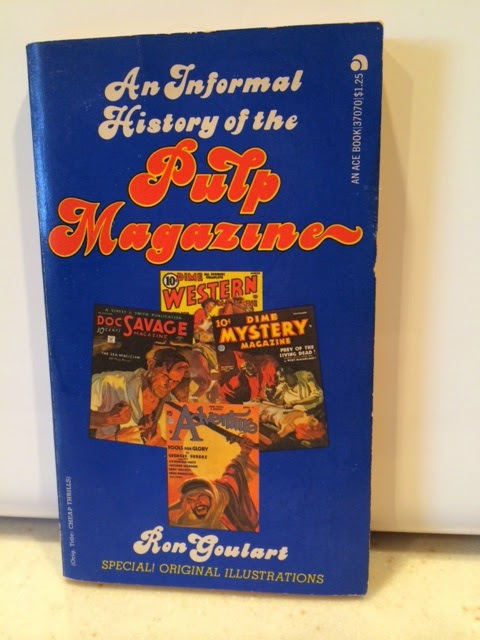 This is from: the geek library
keithroysdon essential geek https://keithroysdon.wordpress.com/2014/02/15/essential-geek-library-an-informal-history-of-the-pulp-magazine/

By the time Ron Goulart’s “An Informal History of the Pulp Magazine” was published in 1972, the pulp magazine – the art form and industry that gave millions of readers cheap thrills on cheap pulp paper and gave us all such heroes as “The Shadow” and “Doc Savage” – was already more than two decades dead. In the 40 (!) years since the prolific Goulart’s book was published, “Pulp Fiction” has come to mean little more than a Quentin Tarantino film.
But in 1972, when Goulart’s book came out, it was a bible to me, a look back into a colorful world of avenging heroes and penny-per-word writers that had been eclipsed by comic books.
Here in Muncie, a bookstore – long gone now – had shelves and shelves of old pulp magazines, which were so named because of the rough-edged, cheap paper they were printed on. I never bought any, although I wanted to. But I couldn’t even begin to start.
By the 1970s, I was enjoying the paperback reprints of pulp magazine stalwart Doc Savage, with those great James Bama covers, and that helped me appreciate the pulps in general and Goulart’s book.
In a relatively slim volume, Goulart gives an overview of pulps but concentrates on the best and brightest, the pulps featuring Doc Savage – precursor to Superman – and the Shadow, one of Batman’s contemporaries and inspirations.
Goulart gives us Tarzan and cowboys and detectives and jingoistic Yellow Peril villains and, best of all, a glimpse of the (mostly) men who created all those characters, working anonymously under pen names and turning out literally hundreds of novel-length yarns that were eagerly consumed by adventure-seeking readers.


Goulart interviewed many of the surviving writers and artists and even devotes the last chapter to their unfiltered memories.

Well...there were trimmed-edge pulps into the turn of the '60s, and RANCH ROMANCES managed to continue into the 1970s, but still...

A good book that I read with great enjoyment back in the day. It opened a lot of doors into the genre fiction of yesteryear for me.

But I still recall bristling at the author's curt dismissal of the Shudder Pulps (I have a clear memory of Goulart writing something like "fortunately none of this material has been preserved and the gruesome stuff is now defunct").

And he included Weird Tales (certainly one of the finest and most influencial genre publications of all time) under the chapter entitled 'Odds & Ends', and subtitled 'You Can Sell Anything Once'.
His comments on the magazine were accompanied with a good deal of derision, which at the time seemed pretty snide to be coming from a guy I understood to be novelizing episodes of Laverne and Shirley.

Goulart later produced The Dime Detectives, which I found to be an even better book.