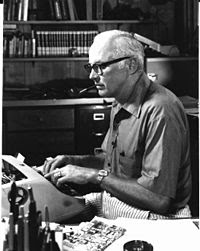 
The postings and writings about John D. MacDonald on Ed Gorman’s blog got me thinking about my own memories of this famed grandmaster.

One of the most embarrassing details about me being a mystery author is just how ill-informed I am about the field, especially when I first started out. I sold my first short story to Ellery Queen’s Mystery Magazine back in 1985 and knew nothing --- zip, zero, nada --- about mystery fiction. So I immediately began a crash course in reading the greats in the field.

At the time, I recalled seeing John D. MacDonald’s works in the bookstore, library, and listed on the New York Times’ bestseller list, so along with Robert B. Parker and Ed McBain, that’s where I started. The first John D. MacDonald book I read was one in the Travis McGee series, “The Green Ripper.” All right, it was number 18 in the series, but being the callow youth at the time --- I’m still callow but no longer youthful --- I remember it had a great cover, showing a man in monk robes, with an Uzi submachine gun slung over his shoulder.

I read the book in less than two days, loved the rip-roaring action and skilled writing, and noticed the listing for the other Travis McGee series. Thanks to a well-stocked town library, began reading the books in order, starting, of course, with “The Deep Blue Goodbye.” My, that was a fun couple of years, devouring all the Travis McGee books, as well as a number of his stand-alone thrillers, and his two collections of mystery short fiction.

One of my goals starting out was to meet this master in person, but this was never to happen. As a relatively new member of the Mystery Writers of America, I saw in the MWA newsletter one day in 1986 that he was ill and was a patient at a hospital in Milwaukee. I sent him a get well card, and learned a bit later that he died there on December 28, 1986.

A few years later, in the early 1990’s, I found myself in Florida with my wife Mona, near Ft. Lauderdale, and there was no question in my mind: we had to make a pilgrimage to the Bahia Mar marina and the famous slip F-18, where the “Busted Flush” had been moored for so many books.

Now, this was before the age of the Internet and Google, so I had no idea of what to expect… and I have to admit, as I drove into this area of Ft. Lauderdale, I was disappointed. It was so built up with condos, restaurants, high rises… and the traffic! I recall reading in some of the McGee books of how he would amble back from the beach to the “Busted Flush,” but based what I saw, poor old Travis would have had to used his football skills to race across all those busy lanes of traffic without getting run down.

Still, even with the built-up nature of Ft. Lauderdale, I did get a thrill of excitement when I saw the sign for Bahia Mar. After navigating past a grumpy traffic guard who didn’t know anything about John D. MacDonald or Travis McGee, we parked our rental car and walked into the marina store, which carried boat supplies, ropes, anchors and outdoor clothing. There, we met an older gentleman --- and damn me for not remembering his name --- who was proud of the marina’s connection with John D. MacDonald. He showed me a glass bookcase that had some of the McGee novels, some fanzines about John D. MacDonald, and a small framed painting of what the “Busted Flush” ---- McGee’s houseboat --- actually looked like. And no doubt seeing my fanboy reaction, he gave me a small print of the painting, which is one of my prized possessions.

Then we went out to the slips, and found a plaque commemorating slip F-18, which, alas, doesn’t actually exist due to their numbering technique. Still, there it was, and we took lots of photos, and before we left, I bought a Bahia Mar cap.

Later that year, no doubt partially inspired by this visit, I began writing my first detective novel --- “Dead Sand” --- and in doing so, I paid a slight homage to John D. MacDonald by ensuring all of my detective novels have a beach theme to the title, since they all take place in and around the tiny New Hampshire seacoast: Dead Sand, Black Tide, Shattered Shell, Killer Waves, Buried Dreams, Primary Storm, and the novel I’m currently working on, Barren Cove. Like the color scheme in MacDonald’s own works, I wanted to differentiate my detective novels from my stand-alone thrillers, such as “Resurrection Day” and “Twilight.”

And in another little homage, in the author’s photo published in Dead Sand and Black Tide, I’m wearing my Bahia Mar cap.

Alas, though, times and reading habits change. John D. MacDonald, who was such a publishing force in the 1970’s and 1980’s, is mostly forgotten now. I still have my collection of MacDonald novels, and still have my Bahia Mar cap. And a few years ago, once again, I found myself in Ft. Lauderdale, and I made my way back to Bahia Mar.

It was all different. The Bahia Mar marina was no longer a marina; it was a “yachting center.” The original marina store --- with its boating supplies, clothing and other goods --- was gone. In its place was a high-end gift shop, selling pricey gear with a generic Bahia Mar logo on it. Nobody in the shop had heard of John D. MacDonald, and the glass bookcase with the prized MacDonald books and artifacts was gone as well.

And in a few minutes, disappointed, so was I.

What a great essay. I was recently told that writing is a truly personal experience, and I think reading is, too. There are books--genre, classic, non-fiction--that the very thought of them creates a fire of memory. I can remember where I was, what I was doing, and how things were going just by seeing a book title.

After my mother died, a couple decades ago now, I dived into reading. It is all I did, and the titles that pulled me through were Bernard Cornwell's sea mysteries--WILD TRACK, KILLER"S WAKE, STORMCHILD, etc--Jack Bickham's Brad Smith novels, Sam Llewellyn's sea mysteries, anything Jack Higgins. Those writers and books are still special to me.

A BRAVE NEW WORLD and THE SCARLET LETTER will always remind me of my short time in Connecticut. Louis L'Amour's LAST OF THE BREED was the book I read on my last childhood backpacking trip. And so many, many more.

But somehow I strayed from my point--really excellent essay.

I read The Travis McGee novels while stationed in Panama City and in Pensacola after my discharge. I loved his books and was thankful to have found them at that time. It saddens me to hear that he is a forgotten author. I still suggest them when asked for a good read. Thank you for your remembrance. I enjoyed the reminiscing.