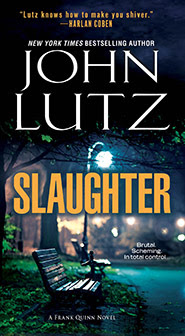 "Lutz knows how to make you shiver.”—Harlan Coben

Snippets and thoughts on and in  SLAUGHTER.

" I tried to give SLAUGHTER a unique kind of slant for a serial killer novel. The experts seem never able to explain why they've killed. Often their motive seems to hinge on family, and some horrible childhood experience. But 'family' seems to be involved. And 'curiosity', perhaps in their own struggles to understand their motivations. In short, they often are committing murder because they are curious about their curiosity. How else to learn? And they do want to learn about themselves, as well as learn about whoever is tracking them. Their nemeses. Together they can put together the puzzle -- or take it apart."

P.25   “If God doesn’t want me to do this, why is he letting me? Why is He urging me? Why is He my accomplice?”
“It’s a kind of sickness that can overcome even the best of us.”
“So this kind of killer is a mental case, silently screaming for help?”
“Usually.”
“Lie on.”
Quinn imagined the killer someplace comfortable, with his feet propped up, watching television.
“You’ll be sorry.”
Two people plus one secret equaled no secret. As characters in SLAUGHTER discover, life is more than anything else about questions.
And family.

When a psychopath starts to terrorize the city, Frank Quinn and his investigative agency are hired by the NYPD Police Commissioner Harley Renz to help catch the killer. With many tricks up his sleeves, it appears that the killer has the upper hand. This is the first Frank Quinn novel that I have read, but it could have easily been a standalone book. With a fast paced, well written plot,
Local readers will find a lot of color, as the plot moves back and forth between St. Louis and New York, in time as well as geography. On a sunny day in 1999, for example, “they disappeared into downtown St. Louis, where Cardinals fans, and Cubs fans from Chicago, would soon be roaming the city streets, looking for new places to eat lunch, or find that bar or restaurant they’d been to during their last trip to St. Louis.”
Indeed, Quinn has to correct New York’s police commissioner after the official says that the St. Louis Crime Scene Unit “is a capable bunch, here in St. Louie.” The rest of the conversation:
“ ‘Notice that nobody here says “St. Louie?” ’ ”
“ ‘I say it,’ Renz said. ‘But then, I’m not one of the Millennials.”