New Books: The Girl With The Deep Blue Eyes 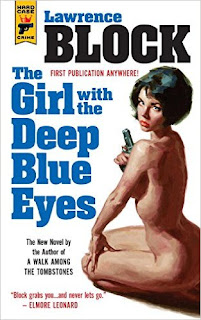 Jay Walker “Doak” Miller is a retired NYPD detective. He left the job for sunny small town Florida supplementing his pension as a part-time private investigator; performing background checks, routine insurance inquiries, and every so often undercover work for the local Sheriff’s office, which is where the story begins.

The wife of a wealthy businessman, looking to hire her husband killed, was fingered by a small time crook. The Sheriff wants Doak to revive his Jersey accent and play the part of hitman; get it on tape, and accept a $1,000 down payment. Doak readily agrees until he sees the woman, and calls everything off. The problem, he doesn’t tell the Sheriff, and he coaches the woman exactly what to say for the tape.

The Girl with the Deep Blue Eyes is challenging. It is short, written with Mr. Block’s usual literate, stark flair, and remarkably complicated. It is third person from Doak’s perspective, but has the feel of first. It is Doak Miller’s story, and intimately told. There is some cheating—the girl’s (the one with the deep blue eyes) backstory is told in narrative disguised as dialogue, but it works.

The challenge is the novel’s lack of morality, or more precisely, Doak’s lack of morality. He is devious, criminal, selfish, and, as the novel develops and Doak’s character is revealed, it is clear he is a man fallen, rather than falling. His destruction is self-inflicted, and the woman is the tool he chooses to use. It is a cock-eyed version of the film Double Indemnity; here the man is predator and the woman his willing playmate.

The Girl with the Deep Blue Eyes admirably plays off the old black and white film noir without losing its own identity and interest. Its plotting is disturbingly good. Nothing is out of place or unresolved. There is a heavy dose of erotica, and not a single likable character. It is both familiar, and new—