ON ELLIOTT CHAZE by Bill Pronzini 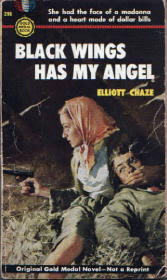 Ed here: Bill Pronzini's contributions to the genre of crime fiction have been enormous. First he created the groundbreaking Nameless series (stronger than ever) second he wrote numerous stand-alones and stories that have won praise and awards world-wide and third he has compiled a body of excellent literary biography and criticism that needs to be collected and published. Here is an example from Mystery*File.

ON ELLIOTT CHAZE
by Bill Pronzini


Elliott Chaze (1915-1990) was an old-school newspaperman who began his journalism career with the New Orleans Bureau of the Associated Press shortly before Pearl Harbor, worked for a time for AP’s Denver office after paratrooper service in WW II, and then migrated south to Mississippi where he spent twenty years as reporter and award-winning columnist and ten years as city editor with the Hattiesburg American.


In his spare time he wrote articles and short stories for The New Yorker, Redbook, Collier’s, Cosmopolitan, and other magazines, and all too infrequently, a novel. In an interview he once stated that his motivation in writing fiction, “if there is any discernible, is probably ego and fear of mathematics, with overtones of money. Primarily I have a simple desire to shine my ass — to show off a bit in print.”

His first two novels were literary mainstream. The Stainless Steel Kimono (Simon & Schuster, 1947), a post-war tale about a group of American paratroopers in Japan, was a modest bestseller and an avowed favorite of Ernest Hemingway.

The Golden Tag (Simon & Schuster, 1950), like most of his long works, has a newspaper background, contains a good deal of autobiography, and is both funny and poignant; it concerns a young wire service reporter and would-be novelist in New Orleans who becomes involved with two women, one of them married, while reporting on a sensational murder case.

His third novel was the one for which he is best remembered today, Black Wings Has My Angel (Gold Medal, 1953; also published as One for My Money, Berkley, 1962 and as One for the Money, Robert Hale, 1985).