Forgotten Books: The Luck of Ginger Coffey by Brian Moore 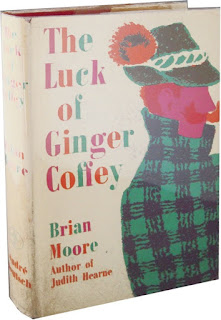 The Luck of Ginger Coffey by Brian Moore

When I was but a lad I read an interview with Graham Greene in which the master said that “Brian Moore is my favorite living novelist.” Who? I’m afraid that the “Who?” still pertains today. Despite accolades from every conceivable quarter Brian Moore never came close to getting the readership he deserved, this despite seeing at least three of his novels turn into well-received feature films and TV movies.

He is a literary dazzler of the highest order. After I’ve pistol-whipped somebody into agreeing to read one of his books, I generally hand them a copy of The Luck of Ginger Coffey, a novel I’ve read at least ten times in forty-some years.

The situation is this: as long as he was in the Army, Irisher James Francis Coffey was all right. His life was laid out for him. But when Coffey (much like Moore himself) takes his wife Veronica and their daughter and moves to Montreal he fails at a series of jobs he considers beneath him (John D. MacDonald did the same thing—he said bosses resented him telling them how to run their businesses after he’d been there two days). His various failures have taken their toll on his marriage. Veronica can’t take any more of his daydreams. (He will be Somebody by God.)

A man named Gerry Grosvenor befriends him and gets him a job as a proofreader. Coffey promises Veronica that he’ll take this only until his “break” comes along. In other words he’ll quit or get fired soon as he usually does. She leaves him, taking her daughter and the little money Coffey has, and flees to Gerry Grosvenor.

We then follow the disintegration of James Francis Coffey in a country not his own wandering lost in the pipe dreams he’s had since childhood. Hilarious, brutal, sad, loving, we watch Coffey try to face reality while winning back his wife. We’ve all known Coffeys; a fair share of us WERE Coffeys in our twenties. But, as F. Scott Fitzgerald said, if you use a type then your burden is to turn him or her into a true person. And what a person Coffey is, so vividly alive that half the book you want to get your hands around his throat and squeeze real real tight; and the other half buy him a beer and say for God’s sake, man, and start talking to him as if you were his father. Now cut out the bullshit, Coffey. For your sake and for your poor little daughter’s.

This book is so elegantly written, so perfectly conceived and rendered that I hold it as a marvel of novel writing. If you’ll give it a chance, I think you’ll agree with me.

By the way, this became a fine motion picture with Robert Shaw as Coffey (a bit older than Coffey in the novel but excellent casting nonetheless) and the wonderfully wistful Mary Ure.

By The Way #2 Brian Moore wrote two at least two Gold Medal novels and one Dell in his hungriest days. Somewhere between them he published The Lonely Passion of Judith Hearne which won a number of notable European literary prizes. He got the awards but no money to speak of so he went back to paperbacking.

Upon Graham Greene's death, Moore became my favourite living author, a position he held until he himself died eight years later. He was a great talent, moving between satire, thrillers, gothic fiction and historical fiction with ease. A marketing department's nightmare.

I have just one more paperback original to add to your list. This would be his last, Murder in Majorca, published in 1957 by Dell.