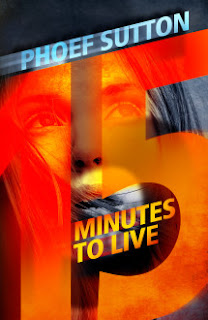 Phoef Sutton is the Emmy and WGA award winning writer of shows like CHEERS and BOSTON LEGAL. He's had three books out so far in 2015: FIFTEEN MINUTES TO LIVE from Brash Books, WICKED CHARMS co-authored with Janet Evanovich, and CRUSH from Prospect Park. He may still have one more book released before the year is out!

1.     Tell us about your current novel. I currently have three novels out. FIFTEEN MINUTES TO LIVE, published by Brash Books, is a re-print of my first novel. WICKED CHARMS, co-authored with Janet Evanovich and published by Bantam, is supernatural romp. CRUSH, published by Prospect Park Books, is about a nightclub bouncer and bodyguard in present-day Los Angeles. It features hard action and a lot of humor. This is my humble attempt to write a Travis McGee, though I’m embarrassed to even say that out loud.

.2. Can you give a sense of what you're working on now? I’m working a sequel to my last novel and a sequel to the novel I wrote before that. Sequels have their own pitfalls. Reintroducing characters in a new way but not repeating yourself? Very difficult. Telling a story that’s like the original but new? Ditto. This is new territory for me. In television they always say you should think of the first six episode of a series as different versions of the pilot. I suppose it’s something like that.

3. What is the greatest pleasure of a writing career? Writing. I love the act of writing. I love being lost in the story, getting to know the characters. It is one of the few times when I am truly “in the moment.”

4. What is the greatest DISpleasure? Pitching. Pitching my work before I’ve written it. I can’t stand it. I’m not a salesman, I’m a writer.

5. If you have one piece of advice for the publishing world, what is it? I’m still learning the ropes. There’s no way I can give advice.

6. Are there two or three forgotten mystery writers you'd like to see
in print again? Richard Prather; the author of the delightfully brash Shell Scott novels. Leigh Brackett; the writer and that everybody knows and nobody knows. As a screenwriter, she wrote everything from THE BIG SLEEP to THE EMPIRE STRIKES BACK. She was a successful science fiction novelist and fine mystery writer.  Robert Arthur, Jr; wrote fine mystery stories for Alfred Hitchcock as well as The Three Investigator kids novels and The Mysterious Traveller radio series. Worthy of rediscovery.

7. Tell us about selling your first novel. Most writers never forget
that moment. Like everything in life, it was mixture of highs and lows. I’d written my first novel, ALWAYS SIX O’CLOCK as an experiment. To see if I could it. I sent to my friends, asked them what they thought. My lawyer, for one, loved it. He sent it out to agents. One of them called me back. She wanted to handle it. She sent it out. We heard from a couple of people. One was a small the publishing house, who loved it. One was a big publishing house, who thought it needed work but wanted to buy it.  I couldn’t believe my good fortune. The big publishing house offered considerable more money and prestige. So I went with them. Big mistake. After the celebration, they got me to change the book, to take out what was special about it, to water it down. It was published and sank without a trace. I learned a lot from that experience. Don’t chase the money and the prestige. Go with the people who understand your work.  I was finally able to put out my original version of the novel, now titled FIFTEEN MINUTES TO LIVE, when Brash Books offered to publish it. It feels great to have the real McCoy available at last.

Ed Gorman,
I absolutely adore you. You are one amazing human being.
Thanks for all you do.