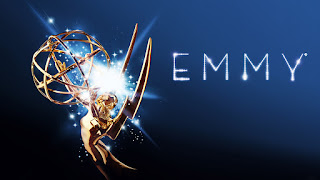 I’ll be reviewing tonight’s Emmy Awards. Check back tomorrow. But to get you in the mood, here are a few snarky inappropriate highlights from past Emmy reviews. Enjoy.

Note to Jeff Daniels and a lot of actors last night: ease up on the spray tan. There’s something wrong when Jeff Daniels is darker than Mindy Kaling.

Elton John, who has nothing to do with television, did a tribute to Liberace. I forget the title. “Candelabra in the Wind” I think.

The Academy sent out a pretty clear message. Louis C.K. – not yet. Lena Dunham – not happening. Chuck Lorre – never.

What does it say when Bill Maher is now 0-32 and most Emmy voters are Democrats?

If Zosia Mamet’s dress was the result of another Kickstarter campaign she must’ve only raised eleven dollars.

Kevin Costner won for playing a cowboy, which is what he should be playing. His days of portraying a baseball player are over unless they do a screen version of CHEERS and hire him as the Coach.

Producer Mark Burnett has said that the “In Memoriam” segment doesn’t have to be such a downer. Really??? To that end, the song under the clips was “Where Dem Girls At”.

Gray ribbons this year as Hollywood rallies to provide relief to the hurricane victims in the Hamptons whose guest homes and tennis courts sustained water damage.

Kate Winslet and Martin Scorsese won Emmys for having already won Oscars. When you win an Academy Award they should just throw an Emmy in the swag bag.

At least one Red Carpet interviewer asked Margo Martindale if she was coming back next year on JUSTIFIED (note: her character was killed)and another said how much she loved Margo's dad, Wink. Still another was hoping the "real" Mildred Pierce would be there for the ceremony.

What was that hideous song Jewel sang? I hate to say it but it really brought down the “In Memoriam” section.

For the first time ever the Emmys were shown live in Los Angeles. NBC recognized they were up against very stiff competition this year -- the Chabad Telethon.

Al Pacino’s won a million awards and his speech was like your uncle Lou’s just before the paramedics came.

Did you notice that not one winner all night, any category, thanked a network or studio for notes?

When Jessica Lange was thanking everyone in the world I was hoping for a promo crawl underneath her to say, “Jessica Lange speech over in 8 minutes.”

Letting Heidi Klum do comedy is like giving a squirrel a grenade.

Anyone who says Jewish girls don’t know how to dress didn’t see Sarah Silverman tonight in her Catholic Girl’s uniform.