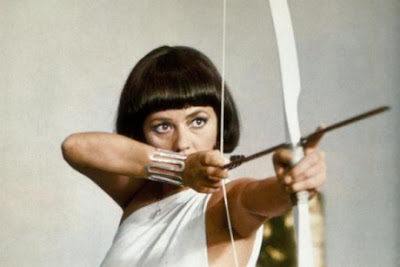 What begins as a French cinephile’s almost obsessive tribute to Alfred Hitchcock becomes progressively weirder, wittier and more Continental in François Truffaut’s 1968 “The Bride Wore Black,” which begins a New York run this week and will then play in many other cities. Truffaut is sometimes viewed as a relative lightweight among the company of big-name ’60s and ’70s European directors, and there’s no doubt his work is uneven. But I find myself appreciating his double-edged, seductive films more and more on repeat viewings. With its summery, Mediterranean surface, Jeanne Moreau as the ultimate femme fatale heroine and a knife-twisting tale of murderous revenge and unexpected romance, “The Bride Wore Black” is well worth rediscovering.

The first thing we see in “The Bride Wore Black” is a printing press churning out black-and-white images of a topless Moreau, but that’s one of several misdirections in this movie, since the story is almost entirely chaste, and the color photography of famed cinematographer Raoul Coutard (who shot Godard’s “Breathless,” Truffaut’s “Jules and Jim” and numerous other New Wave classics) is brilliant. With a deliberately obtrusive Bernard Herrmann score and its roots in a novel by Cornell Woolrich (whose short story “It Had to Be Murder” was the basis for “Rear Window”), “The Bride Wore Black” is more like a Hitchcock movie than some of Hitchcock’s actual movies, at least at first.

for the rest go here:
http://www.salon.com/2011/11/04/the_bride_wore_black_truffauts_delicious_homage_to_hitchcock/

"Certainly as a testament of suffering nobly borne, which is what it will be generally taken for, it is exemplary. However, it is most profound, and most provocative, at another level, the level at which the author comes fully to realize, and to face squarely, the dismaying fact that against life’s worst onslaughts nothing avails, not even art; especially not art."

Ed here: I'd always half-assed believe in Boethius' "The Consolation of Philosophy" but as I get older I wonder. Manville lays out the contrary pretty effectively.
Posted by Ed Gorman at 2:51 PM

Great film, and also a great book by one of the most dazzling mystery writers.

Glad to see BWB is being re-released. I saw it back in the day when it was new, and it's time to refresh my memory...I admire Didion's work, but I'm probably not ready for this new one.