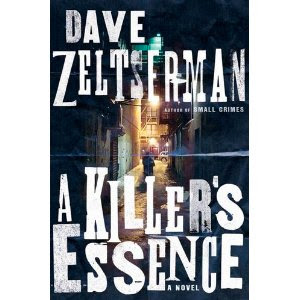 FROM BOOKGASM
A Killer’s Essence
by BRUCE GROSSMAN on NOVEMBER 4, 2011

It’s here: another entry into the gritty and grim world of Dave Zeltserman. For those unfamiliar, Zeltserman has crafted some of the darkest crime novels to have come out in the past few years, and A KILLER’S ESSENCE shows it’s still a world with no sunshine in sight.

Stan Green is a put-upon New York City detective who is short on funds and wishes his ex-wife hadn’t taken the kids and moved to Rhode Island. He is assigned a case of a truly brutal killing. To say the crime scene is grisly is an understatement. He’s forced to work the case alone, running himself ragged while trying to balance his personal life with a girlfriend who does not understand that going out with a police officer has disadvantages.


Green finds the one witness who saw the murder, but there’s a major catch, and here Zeltserman uses the supernatural to a degree that has popped up in some of his earlier novels. The witness, Zach, can’t describe the killer, since suffers from a condition where he sees the true selves of people. Plus, it drains Zach even to leave his apartment since his condition is so intense.

For those thinking that this is one of those books that takes place in a short time frame, Zeltserman shows that cases such as this take time. That other killings happen that might tie in just adds to the frustration for the police and the FBI, who are called in to help. Zeltserman pulls no punches, with a subplot involving Russian mob types, but that is nothing to some of the emotional draining moments that come later. This book is not for the squeamish, that’s for sure.

And that is the kind of writing which shines, especially in a genre that can be filled with books that seem to feature super cops or, worse, know-it-alls who figure out the mystery faster than a speeding bullet. ESSENCE is hard to classify since it’s as much a crime story as one in which fantastical elements play a central role. This is a terrific introduction to a writer on the rise whose style only grows each time. —Bruce Grossman