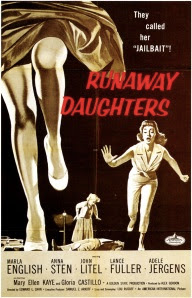 In one of the stranger experiments in cable television history, Showtime’s 1994 Rebel Highway series commissioned ten filmmakers to remake a 1950s exploitation movie. It was the brainchild of Lou Arkoff (the son of American International Pictures founder Samuel Z. Arkoff) and Debra Hill (producer of Halloween). They gave directors $ 1.3 million and a 12 day shooting schedule, to roughly approximate the original shooting conditions (modified for inflation). Unlike the ’50s cheapies, though, they were given final cut, and could choose their own screenwriter, editor and director of photography. This proved irresistible to the (mostly) impressive list of talents who signed on: Robert Rodriguez (Machete), John McNaughton (Wild Things), Mary Lambert (Pet Sematary), Allan Arkush (Rock ‘N’ Roll High School), Joe Dante (Gremlins), Jonathan Kaplan (The Accused), John Milius (Conan the Barbarian), William Friedkin (The Exorcist), Ralph Bakshi (Fritz the Cat) and Uli Edel (The Baader Meinhof Complex).

All of the filmmakers, except for Rodriguez, were old enough to have lived through the era of the film they remade, engaging the aesthetics and politics of the originals in strikingly different ways, alternating between affection and parody often in the same film. Since its original airing, the series has completely disappeared from cultural memory, but Netflix Watch Instantly, that haphazard repository of moving image detritus, is now streaming every entry, and it’s well worth sampling the project’s eccentric film-historical time travel. Below, some thoughts on my favorites.

Joe Dante’s Runaway Daughters, an adaptation of Edward L. Cahn’s 1956 AIP production, is one of the few entries to completely stand on its own as a feature. It is a companion piece to Matinee, Dante’s loving evocation of a 1950s movie-huckster, modeled on William Castle, that he made the previous year. Both films were written by Charlie Haas, and share a tone of gentle satire, about the paranoia brought on by the threat of nuclear war and the space race, respectively. Runaway Daughters follows three high school girlfriends who chase down the no-good boy who loved and left. Working class Holly (Mary Nicholson) thinks she’s pregnant, and is convinced by rich girl Angie (Julie Bowen from Modern Family) and middle-class Laura (Jenny Lewis, who later formed indie-rock band Rilo Kiley) to track the dog down. So they steal a car and hit the road, intercepting the cad before he signs up for the Navy.

Dante opens the film with an irony-drenched found footage montage set to “Let the Good Times Roll”, from a jubilant Eisenhower and Nixon, to the NAACP hung in effigy, and closing with the repressed sexual longings of I Was a Teenage Werewolf (1957), the title character getting hairy while watching a stretching gymnast. The longing on-screen enters the narrative, as the trio of not-so-repressed girls is watching Werewolf at a drive-in, necking with impunity and ignoring the metaphors on screen. One of the neckees is Paul Rudd in one of his earliest roles, playing Angie’s bad boy squeeze, Jimmy Rusoff (named after the original screenwriter, Lou Rusoff). Dante gifts Rudd with the catch phrase from Speed Crazy (1959, a major part of Dante’s mash-up Movie Orgy (’68)), “Don’t crowd me!”, which Rudd dishes with appropriate petulance to his greasy gearhead Dad (played against type by Fabian, a late ’50s teen idol).

David arquette stars in this movie that was orignally made for the tv channel showtime's rebel highway series as a 50's teen haveing to confront his future a bunch of local town thugs whos leader just happens to be the town sheriffs kid and also doesnt like him and his girlfriend. i happened to like this movie