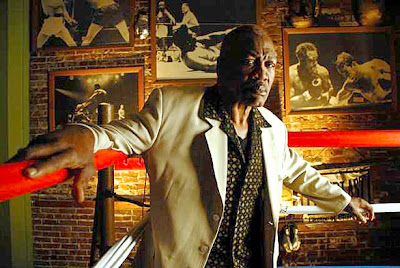 Ed here: There were only two sports I ever followed. I grew up on baseball and boxing. Baseball I gave up in my Twenties (though after this recent World Series--I watched three games--I'm probably coming back) and boxing in my Sixties when being in the chemo room twice a month gave me all the death thrills I needed.

I also used to be a Muhammed Ali fan but that ended when he fought Joe Frazier. Yes, Frazier is uneducated, has a difficult time expressing himself and has always been something of a joke to the Ali-crazed boxing press. But the humiliation and scorn and outright hatred Ali subjected Frazier to put me off Ali forever. I was happy that Frazier won. He's a damned good fighter and has always struck me as a decent sincere man.. I wish he'd won all his fights against Ali..

My thoughts and prayers are with Joe.

The 67-year-old boxer was diagnosed four or five weeks ago, Frazier's personal and business manager said Saturday. Leslie Wolff told the Associated Press the doctors have not yet told Frazier how long he has to live.

"We have medical experts looking into all the options that are out there," Wolff said. "There are very few. But that doesn't mean we're going to stop looking."

Wolff, who has been Frazier's manager for seven years, said the boxer had been in and out of the hospital since early October and receiving hospice treatment for the last week.

"We appreciate every prayer we can get," Wolff said. "I've got everybody praying for him. We'll just keep our fingers crossed and hope for a miracle."

Frazier was the first man to beat Muhammad Ali, knocking him down and taking a decision in the so-called "Fight of the Century" in 1971. He would go on to lose two more fights to Ali, including the epic "Thrilla in Manila" in 1975.

Frazier was bitter for many years about the way Ali treated him then. More recently, he said he had forgiven Ali for repeatedly taunting him.

Frazier was a small yet ferocious fighter who smothered his opponents with punches, including a devastating left hook he used to end many of his fights early. It was the left hook that dropped Ali in the 15th round at Madison Square Garden in 1971 to seal a win in a bout where each fighter earned an unheard-of $2.5 million.

Ali and Frazier put on an even better show in their third fight, held in a sweltering arena in Manila as part of Ali's world tour of fights in 1975. Nearly blinded by Ali's punches, Frazier still wanted to go out for the 15th round but was held back by trainer Eddie Futch in a bout Ali would later say was the closest thing to death he could imagine.

Frazier won the heavyweight title in 1970 by stopping Jimmy Ellis in the fifth round of their fight at Madison Square Garden. He defended it successfully four times before George Foreman knocked him down six times in the first two rounds to take the title from him in 1973.

In recent years, Frazier had been doing regular autograph appearances, including one in Las Vegas the weekend of a Floyd Mayweather Jr. fight in September.
Posted by Ed Gorman at 10:00 AM

I thought Joe Frazier was a good, sincere guy back when I followed boxing. Peace to him and his family.

And remember when he did a music act? Smokin' Joe and the Knockouts or something like that.

I was never an Ali fan.

Thanks for the attention to Joe Frazier. I also am not a fan of Ali because of his horrendous treatment of Frazier. I gained a lot of respect for Bryant Gumbel when he admitted in one of the many documentaries about “The Fight” that he too had joined the Ali bandwagon back in the day because of the racism Ali had instigated (calling Frazier an “Uncle Tom”, etc.). Gumbel admitted “I was wrong” ... Frazier was literally a sharecropper’s son; literally poor and uneducated (and not the teacher’s kid, like Ali--fighting for the masses? Please.). Frazier was an honest and sincere guy. His greatest moment (knocking Ali on his ass in the 15th) is etched in my memory—all the frustrations he had because of Ali unleashed with one left hook.