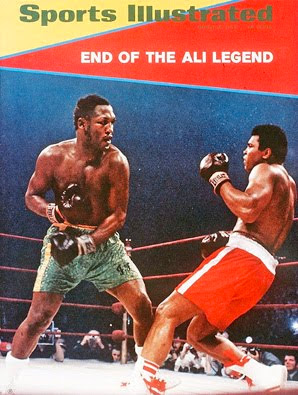 Ed here: Norman Partridge is one of my favorite writers. He's that best thing of all, an original. :Here's a post on his blog about the death of boxer Joe Frazier. The truth, masterfully stated. (This'll take you to his website for other excellent pieces as well http://americanfrankenstein.blogspot.com/2011/11/goodbye-smokin-joe.html)

Of the men who held the heavyweight championship in the seventies, Joe Frazier was my favorite. Fact is, Frazier may be my favorite heavyweight champ, period. I loved the way the guy fought. His signature left hook was a miracle of speed, precision, and devastating power, a punch that made a liar of any math geek who'd try to tell you that the shortest distance between two points was a straight line. I loved Frazier's backstory, how he'd come out of nowhere to make himself into a fighter, how he'd torn up his hand in the Olympics and managed to bring home a gold medal anyway, how he'd had to work in a slaughterhouse and bust his ass to become champ even after he had that gold medal around his neck. I loved Frazier's work ethic, and the way he carried himself, and the way he did his business in the ring.

I loved the way Joe Frazier did his business out of the ring, too.

And when it comes to Frazier's life in and out of the ring, you can't talk about Smokin' Joe without talking about Muhammad Ali. While I always respected Ali's skill as a fighter, I lost respect for him as a man because of the way he treated Joe Frazier. What Ali did went far beyond gamesmanship, promotion, or any sense of common decency. Plain and simple, he started off calling Frazier an "Uncle Tom" before their first fight, and ended up calling him a "gorilla" before the third. You can't scrape much lower than that kind of snake-bellied jabber unless you start badmouthing a man's mama.

You can alibi for Ali -- he certainly had a raw deal when his heavyweight title was stripped in the sixties, and he had a lot to be angry about -- but why Joe Frazier became his most frequent target is a mystery. Frazier had done Ali several good turns when Ali's career looked like it was way past gone. But whatever Ali's reason, he wasn't fooling around with the stuff he put on Frazier. He used his words with the same precision and power that he used his fists. Those words were built to hurt Frazier, and wound him in places punches couldn't touch, and I have to think they did their job.

But Joe Frazier did his job, too.

And the thing that always stuck with me is this: Smokin' Joe did his job in the ring.

Looking back, Frazier's first fight with Ali has to stand out as the biggest of all the big fights to come along in my lifetime. I still remember how Ali's trash talk became the focus as the fight built... just as I remember the beating Frazier put on Ali once the bell rang, and the brutal left hook that knocked Ali down that night in New York, sealing the deal and letting the world know who the real heavyweight champ was, for sure and for certain.

Yep. That's what I took from Joe Frazier.

Here was a fighter who did his talking in the ring.

The first Ali fight was the top of the mountain for Smokin' Joe. Somehow, I don't think it ever got better than that. To Ali's credit, he took the second fight of the trilogy, nearly putting Frazier out for the count in that one. The third fight is a legend, and much has been made of it. Read what Ali had to say, and it was the closest thing to death a fighter could experience. Read what Frazier had to say and it's a miracle he made it into that ring in Manila, let alone managed to fight the fight he did that night. As the old saying goes, Frazier was blind in one eye and couldn't see too well out of the other by the time he tangled with Ali for the third time. He had cataracts, plus other problems, and still fought one hell of a fight. "I accepted the hurt, and damage, as the price of being the best," Frazier said. "I saw myself as a warrior who was obliged to carry on through thick and thin. I wasn't the best athlete in the world, but I had that fire in my belly. And I was reckless in my determination."

One last memory -- Joe Frazier was one fighter I always wanted to meet, but I never did... though I could have. I was in Vegas when his son Marvis fought Larry Holmes for the title, and I spent a week going to both training camps and watching their workouts. Of course, Smokin' Joe trained Marvis, who was the nicest young guy in the world. But Joe Frazier just didn't seem like the kind of guy you'd walk up to and start a conversation. He didn't give off that vibe. He came into the room (which was actually a big corrugated metal equipment shed behind Caesar's Palace), and he looked like a man who was there to take care of business, not chitchat about it, or talk about his own glory days. He was there to work with his son, and try to help Marvis snatch the belt from Holmes. So I didn't really regret not talking to Frazier. Fact is, watching him work with Marvis that week just cemented the way I'd already come to see the man, so maybe it was better that way.

I'll tell you this, though. Seeing Joe Frazier up close, I was surprised how small he actually was. Mostly, he's listed as 5' 11 1/2", but he sure looked a lot more like five-ten to me. And, really, that just makes the guy all the more amazing.

Anyway, I've linked this before, but if you've never seen Smokin' Joe in action or want another look, check out this clip over on youtube. If you're a fight fan, you'll notice right away that the timeline is a little off, but hey, what can I say -- its heart is in the right place.

So was Joe Frazier's.


NORMAN PARTRIDGE
Nix that. Call me Norm. I write stuff. Horror,suspense, noir, pulp -- with combo plates available for repeat customers. My “personal best” novel is Dark Harvest, which was chosen as one of Publishers Weekly’s 100 Best Books of 2006. My sixth short story collection, Johnny Halloween, is now available from Cemetery Dance Publications. "It’s a Boris Custom painted metal-flake black, and it buries all the competition at the track..."
VIEW MY COMPLETE PROFILE
Posted by Ed Gorman at 12:28 PM

Nice tribute. I enjoyed reading it. Thanks for sharing, Norm & Ed.