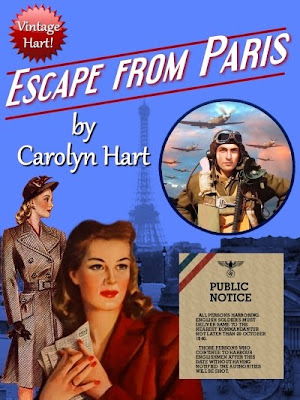 There are edits and there are edits. This book was first published in England in 1982. It came out with a word count of 55,000 words. The problem was the manuscript was 93,000 words. Now THAT's an edit.

Fortunately Oconee Spirit Press has now published the full version in a very natty trade paperback. Since we all know most of my synopses are terrible let me as usual I'll let the press release do the heavy lifting.

"ESCAPE FROM PARIS is the story of a year of war, the year France fell to the Germans and England awaited invasion. It is the story of people around the world, touched by war. It is also the story of two American sisters (Linda and Eleanor) in Paris who help British fliers from Occupied France. The Gestapo has decreed death for all involved in saving RTF fliers."

I wasn't sure what to expect when I started reading Escape but within four pages I was hooked. The book begins cleverly and powerfully with short sharp chapters focusing on various people in various places caught up in the war. Readers get a vital sense of a WORLD war right at the start.

Though the novel is rich with historical touches and insights the story is relentlessly told with numerous scenes of suspense perfectly set up and executed. From the psychotic German obsession with destroying Jews to the turncoat cooperation of the Vichy government to the underground movements (such as the one the sisters participate in) Escape is a non-stop thriller that a wide range of readers will not only enjoy but also remember.
Posted by Ed Gorman at 3:09 PM

I'm so glad you featured ESCAPE from PARIS. I'm a huge fan of Carolyn Hart and this book is terrific. The characters--as always--are wonderfully drawn, the plot is full of white-knuckle suspense and I love the themes of resilience and courage.It's a fascinating book and deserves wide coverage.