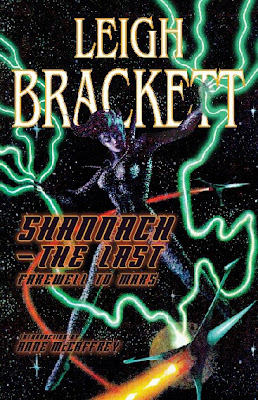 Picking up where Lorelei of the Red Mist: Planetary Romances left off, this volume collects the final 17 stories of strange adventures on other worlds from the undisputed "Queen of Space Opera." Drawn from the last years of pulp magazines such as Planet Stories, Startling Stories, and Thrilling Wonder Stories, Shannach – The Last: Farewell to Mars sees Brackett at the peak of her talents. Oddly, it is at this point where she abandons the "planetary romance" sub-genre and embarks on a small string of stories tinged with social relevance. This departure didn't stop editors asking for some of "that old Brackett magic" and she offered up two latter day tales ("The Road to Sinharat" and "Purple Priestess of the Mad Moon") before returning to chronicle further adventures of Eric John Stark in her final "Skaith" novels. Closing out the collection is a trio of tales written on commission from the "king of anthologies," Roger Elwood.

The book is adorned with Frank Kelly Freas' and Ed Emshwiller's vintage illustrations from the original pulp magazines.


In a review of Lorelei of the Red Mist: Planetary Romances Paul di Filippo says "[Brackett's work] is replete with hard-bitten protagonists with wounded psyches, females both nurturing and malevolent, weird alien life forms, strange planetary environments, danger, treachery, camaraderie and even spiritual epiphanies. In short, this book holds the essence of SF—at least, the essence of one very important school of it."

I don't want to seem rude, but jeez, who buys these books? I'm kinda curious who the market for these volumes is. 80-year-old collectors with an incurable jones for the heyday of the pulps?

Pete, why are you wasting your time leaving com-girl-ts here when you could be jerking off to "THE PAULINE HICKEY FAN PAGE" ? ! ? !.

Pete, Dennis Hopper was a worthless pile of dog-shit, the only two good things about him were his rampaging heterosexuality and the fact that he was an all-American, but like i said, in every other respect that silly bastard stunk to high-heaven.

"The Hamster" may be an infant but he certainly says a lot of things that make sense.

Except that I gather that most (all?) of these comments might've been written by the charmer.

Sadly, looks as if the introduction to this book will be among the last pieces written by Anne McCaffrey, as well. RIP.