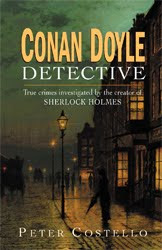 I always thought that Arthur Conan Doyle was a pretty cool guy. When I was young, I was all caught up in the almost otherworldly portrait he gave us of Victorian London and environs: the fog, the hansom cabs, the echoing footsteps down the dark alleys, the pitiful ones of Whitechapel, the self-indulgent ones of the aristocracy. And then when I got older and had more appreciation of what it was like for a father to lose a son, the way Doyle turned to mentalism of various sorts…

The one aspect of the Doyle story I’d never paid much attention to was his very real interest in true-crime cases. As Erle Stanley Gardner would do several decades later, Doyle helped clear innocents and thus helped them escape the gallows. And he worked with police from a variety of cities, towns and even other countries when they asked his opinion or advice on matters concerning open cases.

All this is documented in a fine new book CONAN DOYLE, DETECTIVE: THE TRUE CRIMES INVESTIGATED BY THE CREATOR OF SHERLOCK HOLMES by Peter Costello that moves as swiftly as a Doyle story while offering us a look at a Doyle most of us have ever encountered, even in some of the better Doyle biographies.

There are chapters on six of the UK’s most famous cases, including Crippen, Jack the Ripper and the Irish Crown Jewels. Even when Doyle was wrong in his conjectures, his process of deduction is fascinating to follow. Likewise, even in cases of lesser fame, Costello sets all the crimes in a context that helps give us a vivid sense of the era.

A real treat for several audiences: those who love Holmes, those fascinated with Doyle himself, those interested in the formation of modern crime-solving techniques and those (and there seem to be many) who wished they’d lived in the time of Queen Victoria.
Posted by Ed Gorman at 2:41 PM

Sherlock Holmes was a bloody faggot.

And so was Dr. Watson, the bloody dirty, filthy, disgusting, pansy queer bastards.

I wonder how it compares to Hines' The True Crime Files of Arthur Conan Doyle? I've had that one on my library for a while.

I`d love to shove my knob up kellys bum, that bird is fucking gorgeous ! ! !.

What is happening to the comments section? Where did the band of trolls come from? Show some respect trolls, go haunt some other blog!

Hey Fred, trolls like Jervaise Brooke Hamster are very important to the internet because they tell the truth as opposed to being liars and hypocrites like everyone else.

Sorry Eddie, you`re right, i wont do or say anything that might offend or upset Jervaise ever again, once again my sincerest apologies.