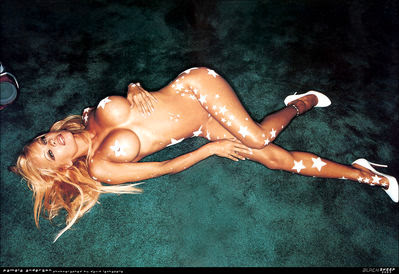 By Tim Kenneally
Sex-tape veteran and frequent "Playboy" Playmate Pamela Anderson is reclaiming her virginity -- at least on Canadian television.

The former "Baywatch" babe will play the Virgin Mary -- yes, the chaste mother of the Son of God -- in CTV's "A Russell Peters Christmas," the Canadian network announced Monday.


The special, which will be hosted by comedian Russell Peters, will deliver "an irreverent twist on the Christmas special making it unlike anything viewers have seen before."

No kidding. What, Ron Jeremy wasn't available to play Joseph?

Also joining in for the twisted Yuletide festivities: Michael Buble, Jon Lovitz and Ted Lange, lovingly known by millions as Isaac the bartender from "The Love Boat."

"A Russell Peters Christmas" will air Dec. 1 at 9 p.m. ET on CTV -- assuming the Christian community doesn't somehow cause a power meltdown with mass collective outrage.
Posted by Ed Gorman at 3:10 PM

It's casting like this that makes me glad I'm alive.

For a few seconds I thought the head read "iconic" an not "ironic." At any other time in history, I'd have realized my mistake at once. Now, anything's possible.

I predict a lot of lightning strikes in Canada when this finally airs...