I was planning to see this until 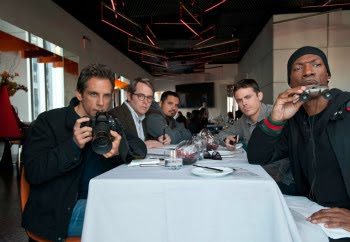 Ed here: I don't go to many movies. But this one looked like it might be fun. Until I realized (which I should have realized along time ago) it was directed by Brett Rattner than whom there is no lower form of director. I've seen a number of his movies and they were all terrible. Plus I've seen him interviewed. He does himself no favors by letting the public hear him celebrate his wonderfulness. With so many good actors in it I may see it anyway. Hope and hype spring eternal.

By Alonso Duralde
In the new action-comedy “Tower Heist,” Alan Alda plays a Bernie Madoff–ish financier who promotes his business acumen and lives a flashy lifestyle, complete with penthouse apartment and world-class art collection, but winds up being a total fraud.

The character winds up being a walking metaphor for the movie itself, which boasts a terrific cast, gorgeous cinematography and a caper-flick score that drives the action. Too bad that when it’s over you realize that the characters aren’t interesting and the titular heist wasn’t all that thrilling.

Arthur Shaw (Alda) lives atop the Tower, New York’s priciest and most exclusive high-rise, where a devoted staff sees to the needs of its demanding tenants. Running that staff is Josh Kovacs (Ben Stiller), who’s so devoted to his job that he seems to have little time for any fun apart from the online chess games he’s always losing to Shaw.

Shaw gets arrested for fraud, and Josh is forced to tell the staff that he’d given their pension fund over to Shaw to invest for them. FBI special agent Claire (Téa Leoni) tells Josh that they didn’t find any money in Shaw’s apartment, but Josh remembers that Shaw had installed a hidden wall safe years earlier.

With blind faith that Shaw’s emergency nest egg is locked in that safe, Josh decides to plan a robbery, using the knowledge that he and his brother-in-law, building concierge Charlie (Casey Affleck), have of the Tower to get the money out under the nose of Shaw and the FBI agents watching over him while he’s under house arrest.

On paper, this has all the makings of a great caper comedy, from a timely revenge-on-the-rich-guy plotline to terrific New York locations shot by Dante Spinotti to a jazzy Lalo Schifrin–esque score by Christophe Beck to a snappy comic ensemble (which also includes Eddie Murphy as Josh’s childhood-acquaintance-turned-petty-thief, Judd Hirsch as a humorless building manager, and Gabourey Sidibe as a maid with a talent for safe-cracking).

for the rest go here:
http://www.thewrap.com/movies/column-post/tower-heist-makes-glitzy-hollow-bauble-32454
Posted by Ed Gorman at 2:44 PM

The review in THE NEW YORKER scared me away. Have to say I am not a Ben Stiller and Eddie hasn't made a good movie in years. Nothing better than a good heist movie and nothing worse than a bad one.

My cousin recommended this blog and she was totally right keep up the fantastic work!