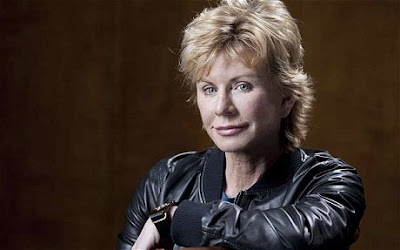 FROM THE TELEGRAPH UK
Patricia Cornwell: 'Powerful women are more likely to kill’
Patricia Cornwell, the doyenne of crime fiction, explains why her new book is filled with female psychopaths.

IIt isn’t giving too much away to reveal that all of the criminals in Patricia Cornwell’s new book – and there are several – are female. There is one who hammers nails into a child’s head, another who is a convicted sex offender, and a woman on death row for murdering a family as they slept. Then there is the mother who smothers her children and – my personal favourite – the woman who condemns her victims to long and painful deaths by Botox (she injects food with the botulinum toxin). Meanwhile, men are reduced to mere walk-on roles, emasculated, castrated – not literally, though this process does appear in other
Cornwell novels – and cast as helpless husbands and ineffectual police officers.

Red Mist is Cornwell’s 19th Scarpetta novel, the one that will nudge her over the magical 100 million copies mark. It is also the book that coincides with her work finally hitting the big screen. Angelina Jolie has signed up to play Cornwell’s protagonist, Dr Kay Scarpetta, a former chief medical examiner of the state of Virginia and forensic consultant.

In previous novels Scarpetta has dealt with sexual sadists and serial killers who leave limbless corpses, but none have featured quite so many female psychopaths. The main killer in Red Mist poisons her victims, which Cornwell tells me “is very female”. She says this in a cool, clinical manner, matter-of-factly, as if poisoning people was the most natural thing a woman could do after having periods and growing breasts (I suppose this detachment must be what happens when you have worked in a morgue, spent much of your time shadowing forensics experts and frequently attended autopsies, as Cornwell has.) “[Poisoning is] a long, drawn-out death, so it’s diabolical, sadistic, psychological, which is a female thing. It’s an inversion of the maternal instinct to nurture.”

for the rest go here: http://www.telegraph.co.uk/culture/books/8921614/Patricia-Cornwell-Powerful-women-are-more-likely-to-kill.html
Posted by Ed Gorman at 1:07 PM

Aileen Wuornos, possibly the most famous female serial killer of recent times, was probably about as powerless as you could get. Thrown out of home as a teenager, she was at the bottom of the underclass. No looks, no smarts, no talent. But she still murdered numerous johns who were desperate enough for sex to approach her.

Cornwell, by the way, is a real kook. Go hunt up the Vanity Fair profile from about ten years ago. It's something.

Readers grow more and more jaded, and Ms. Cornwell knows exactly how to up the ante. But one wonders if these are, increasingly, bad books.

Lisa Scottoline is going down the same road.

They're feeling murderous, so everyone else is, too.

Another victim of botox. Couldn't happen to a more deserving face.

And just what is she basing that statement on? Most of the women I've seen convicted of murder are poor or otherwise helpless.

I think her facts are as fake as her new lips.