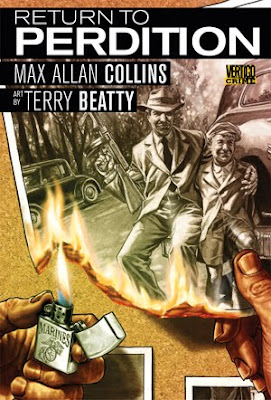 After three graphic novels, two prose books and a Tom Hanks movie, Max Allan Collins' Road to Perdition saga is winding to a close — and a somewhat surprisingly peaceful ending.

The writer's 1998 graphic novel Road to Perdition introduced 1930s Mob enforcer Michael O'Sullivan, his young son, and their quest for revenge, and the new Return to Perdition, out now from DC Comics' Vertigo imprint, completes the tale with O'Sullivan's grandson, Michael Satariano Jr., who returns home from the Vietnam War in the 1970s to an equally violent life as a government assassin.

Collins' ambitious journey dates back to 1993. Working with his editor at DC's now-defunct Paradox Press, Collins initially envisioned three graphic novels of 300 pages each that would tell the adventures of O'Sullivan and his kid on the road, robbing banks and eluding gangsters a la The Fugitive.

He had started planning a sequel two-thirds of the way through Road when he heard that DC was cancelling the line, meaning he had to wrap his story up in the final 100 pages. In the meantime, he had been arguing with his editor about whether the series should simply be about the father and son, or a bigger generational saga like The Godfather.

"The more I thought about, the more I thought he had a good point," Collins recalls. "I mapped out the subsequent generations: The boy in Road to Perdition growing up, going to war, getting sucked into the Mob himself and ultimately having a son who similarly — primarily because of the role of vengeance in their lives — got drawn into thus life of crime."

If everybody in the world were to simultaneously watch "Poltergeist 3" i wonder if it would bring Heather O`Rourke back to life ?.

Jervaise Brooke Hamster is fast becoming one of the greatests trolls on the entire internet, and his magical and charming obsession with Heather O`Rourke makes him even more legendary.