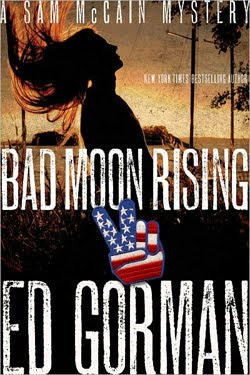 The Sam McCain mysteries are always fun for this reader; partly because they are always historical novels and partly because they’re always so well written. Bad Moon Rising is no exception. The Gorman-McCain formula touches on nostalgia and easily identifiable landmarks along a familiar timeline. The fact Gorman has been doing this longer than my married kids are alive is no fluke; he’s survived where many authors haven’t. Bad Moon Rising offers the usual cast of Black River Falls fun and interesting characters, plus a few new ones, and a plot that twists as good as any. A reader choosing any one of the series will be well invested in Sam McCain before they know it.

Having read a few of the McCain series, I was smiling and nodding as soon as I came across an early passage where Sam mentions the Sitar (and how mostly annoying it is to have to listen to one—music to torture one’s ears has always been my definition). It is that sense of timeline/nostalgia/Americana (so what Ravi Shankar was Indian? I remember being tortured by his sitar at the Concert for Bangladesh in Madison Square Garden).

And let’s face it ... people went to the bathroom in masses when two things happened back in the day ... Ravi Shanker took the stage or a twenty-minute drum solo began.

Gorman presents what many of us assume are the good old days while always reminding us there was some bad days as well; Vietnam, long awaited civil rights legislation waiting to take hold, etc.. In Bad Moon Rising, McCain is confronted with the death of the daughter of a wealthy libertarian of sorts. Paul Manwearing was recently widowed and quickly remarried but the stepmom to his two daughters is well versed in remarrying. Paul’s daughters were not happy with the new woman in their lives and each dealt with it in her own way; seeking attention from their father in self destructive ways—how kids in such situations often seek attention.

There’s also a high school football star with very dysfunctional parents forever fighting one another (at the top of their lungs) making their home a place not to be. A multitude of potential suspects to the murder of Manwearing’s daughter will keep you guessing throughout. There’s a hippie commune that drives many of the good folk of Black River Falls somewhat crazy and preacher Cartwright does his usual fire and brimstone routine (something that drives Sam crazy throughout the series), but if there’s anything missing (for this reader) from Bad Moon Rising, it is more of the back and forth between Sam and Judge Whitney (Sam’s Republican Alter ego) … and if I’m not mistaken, she didn’t even shoot a rubber band at him this go. A reformed Judge Whitney? Say it ain’t so, Mr. Gorman.

Sam is always fun to read about and Bad Moon Rising is no disappointment to this wonderful series.
Posted by Ed Gorman at 12:53 PM

Congrats. Here's hoping it stays up there comfortably for quite a while.

Kelly and Patti are both such gorgeous babes, i`d be honored to sodomize them both.

I'm sure they find you irresistable, you smooth-talking son of a bitch.

My Jervaise is such a cheeky sod but at least he's truthful about the lust that governs his mind.

I want to bugger Dolly Parton (as the bird was in 1964 when the bird was 18, not as the dirty old slag is now obviously).