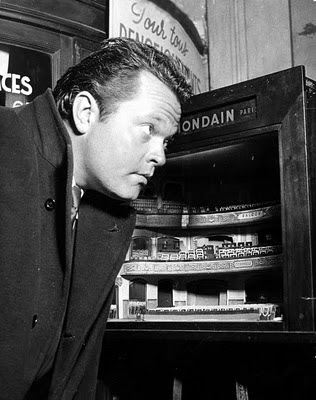 Ed here: The last time I talked about Orson Welles I got into some trouble. A few readers of the blog felt that I was denigrating him when I said that he was not a martyr but frequently the cause of his own trouble. I cited a tape I'd heard of him from the 1970s in which he was reading copy for the wine company he then represented. The tape was of the recording session itself with Welles doing various takes on the copy. He didn't like the direction he was getting and became so abusive and angry it almost sounded like a gag. He went out of his way to insult the ad agency people. And he kept it up. He was being paid a lot of money. There wasn't a better way to handle it? Jake Hinson at The Night Editor speaks to this and other Wellesian issues in a fine piece he recently wrote.

By then, however, the money had dried up in Europe. Welles may have been a great artist, but he was never box office gold. He was barely box office bronze. He returned to America and took roles in films that were beneath him. He channeled the money back into his projects like THE OTHER SIDE OF THE WIND, a drama featuring John Huston, Peter Bogdanovich, and his buddy from his RKO days, JOURNEY INTO FEAR director Norman Foster.

He still dabbled in pulp and noir, too. He shot an adaptation of Charles Williams’s DEAD CALM called THE DEEP with Laurence Harvey, working on it until Harvey died. He planned an adaptation of Jim Thompson’s A HELL OF A WOMAN with director Gary Graver, but like almost all of his projects in the seventies and eighties, it had to be shelved for lack of funds. Hollywood, which had never liked Welles, had now forgotten him. He was old and broke in a town where only youth and money mattered. In 1985, at the age of 70, he died at home working on a script.

There is a heartbreaking bargain you have to make with Orson Welles. Much of his work—more than that of any other major director—comes to us in damaged shape. When you consider that he was making difficult films to begin with, the full picture begins to emerge.

Orson Welles was either too much of an artist or too much of an egomaniac—perhaps both—to ever fully commit to genre, even for the duration of a single film. He liked genre but viewed it as a beginning, a jumping off place. This was no less true for a thriller than for a Shakespeare adaptation. His instinct was to be, as he once angrily wrote Harry Cohn, “original, or at the least somewhat oblique.” Win or lose—and he lost often—his films were stamped with the conviction that cinema was an instrument of experimentation and poetry, not formula.

for the rest go here:http://thenighteditor.blogspot.com/2011/10/noir-of-orson-welles-part-v-rosebud.html
Posted by Ed Gorman at 1:03 PM

I have always been deeply conflicted by Welles. He was, yes, a misunderstood genius who was abused by the system. But he chose to work in that system and also chose to sabotage many of his opportunities -- and, in the process, sabotage his own talent. I sometimes hold him up as a martyr to squashed creativity, but other times I see him as a cautionary example of self-destructive behavior.

Seems to me that many of the greats, no matter the field, had some sort of self destructive streak that impacted their careers in a major and harmful way.

The myth that Welles sabotaged his own films is just that––a myth.

From Publishers Weekly
The depth of Heylin's research on Welles's consistent workaholic approach to his art, especially his examination of a 58-page memo Welles wrote to Universal after it dismantled Touch of Evil, aids Heylin in arguing against the claim put forth in other Welles bios that his work declined after Citizen Kane due to his own egotism and excess. Heylin's is the most well-researched and evenhanded refutation of this line of thought published to date, and shows in detail how Welles "was undone by real people, with real motives"—most notably Columbia studio head Harry Cohn, who cut The Lady from Shanghai from 155 to 86 minutes. Heylin (Bootleg: The Secret History of the Other Recording Industry; Bob Dylan: Behind the Shades Revisited; etc.) persuasively argues that Welles did indeed make masterpieces after Citizen Kane, but that audiences never got to see them because of continual intervention from Hollywood studio bosses who "had no idea what [Welles] was doing, and why he was taking so long to do it."

Orson Welles was a bloody load of old rubbish, perhaps the most ludicrously over-rated film-maker of all-time.

You are a horse's ass.

ED: here's a small world story for you. My uncle, Richard Barr (nee Baer) was Orson Welles' Executive Assistant in Hollywood during the war years, and then when he made Citizen Kane. In fact, my uncle had the first spoken line in the film -- he was the projectionist who "ran the film back"... Dick later came back to NYC where he produced plays instead, but I have his memoir where he talks about his days with Welles. Fascinating stuff.

I want to bugger Libby Hell-girl.

On the contrary Pete my old mate, it is you who doesn`t seem to realise what a pretentious talentless fart Orson Welles really was.

Jervaise, it was interesting that you had to change the second syllable of Libby Hellmann's surname, presumably because of your murderous homo-phobia ? !.